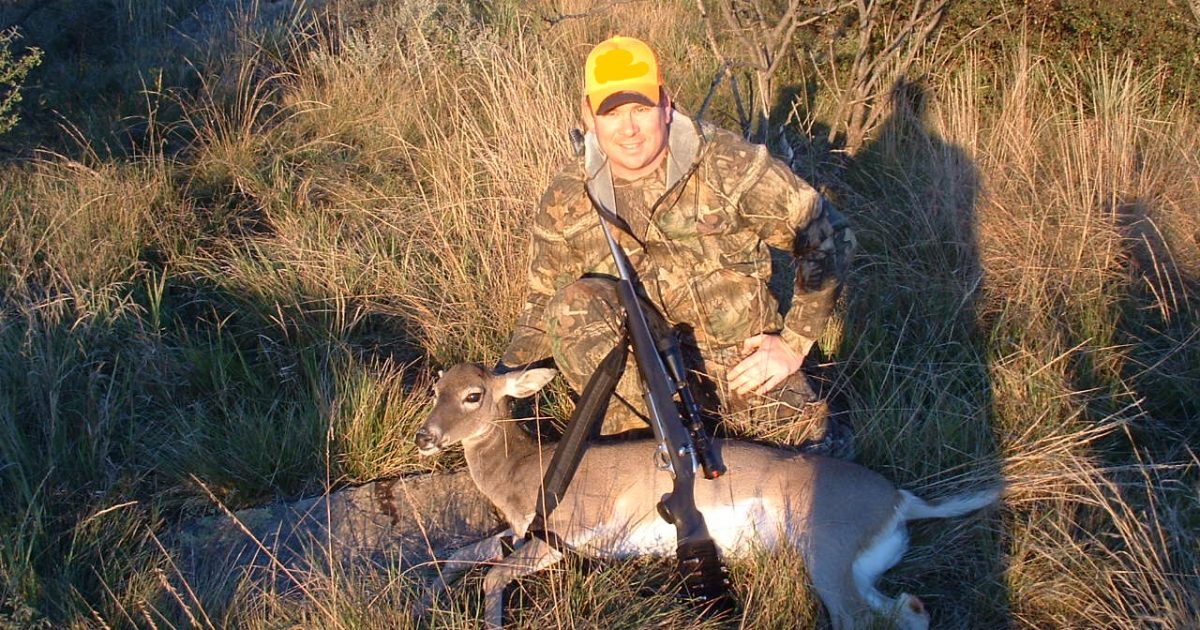 Hunting is a key part of our history. None of us would be here today without it because our ancestors would not have survived. Not only is hunting about providing meat, but it also teaches any number of valuable life lessons. It is a safe and great way to make fantastic memories with friends and family. So why are hunters’ rights and their way of life under attack?

I will give you my version of why based on my observations and encounters with anti-hunters, non-hunters, and hunters. Yes you read that right, some of it is our own fault, but I will get to that later. One of the biggest issues is the public’s perception of hunting and why we hunt at all. If I had a dollar for every time I heard “why don’t you just get your meat at the grocery store” I’d be wealthy. There is a huge difference in the way meat such as beef, pork or chicken is harvested versus the much more respectful way I take my game.

Don’t believe me? My animals are harvested in their natural environment, under fair chase conditions, always with the ability to escape. They are not loaded up and trucked someplace en masse for an automated death under stress. Meat plants can talk about how “stress free” their process is, but it will never beat the animal’s own habitat. Besides, you will not get any more organic than wild game.

Hunting is a well-regulated activity, managed mostly at the state level with some federal oversight. The different state wildlife agencies use factual, biological information to best set the harvest limits for the variety of species available. Normally the feds are involved with migratory birds, animals on the Endangered Species List, federally managed refuges and lands, and the distribution of funds to the states. Wildlife populations must be managed through logical, science based data, not emotional crap that some would prefer.  The state agencies rules and regulations dictate the legal methods of hunting such as weapons, season dates, even times of the day for hunting.

Sportsman (hunters and fisherman) have borne the brunt of wildlife conservation funding since the Pittman-Robertson Federal Aid in Wildlife Restoration Act and the Dingell-Johnson/Wallop-Breaux Federal Aid in Sport Fish Restoration Act were enacted by congress. These acts have contributed more than $21 billion through excise taxes on hunting, shooting, and fishing equipment and boat fuel. These funds are administered to the states by the U.S. Fish and Wildlife Service. The states get additional money through the sale of hunting and fishing licenses, tags, and stamps, paid for again, by sportsman.  https://www.fws.gov/news/ShowNews.cfm?ref=states-receive-more-than-$1-billion-for-recreation-access-conservation-&_ID=3682

In other words, we are the biggest supporters and contributors to wild game and wild lands. So, if we do so much good, why do we have problems with anti-hunters? There are a wide variety of reasons and I’ll address some obvious ones.

If you spend enough time with an “anti” you’ll find they are mostly emotional in their opinions and reactions to hunting. I’ve yet to talk to one that had a logical, valid reason for stopping hunting. I’ve heard the argument that animals should have the same rights as humans. Really? It makes me wonder what they’ve been smoking.

They are wild creatures, untamed and don’t think like we do. They are not animated movie creatures, talking, thinking, and interacting like humans. Want proof? Ask the morons over the years that have been tossed by bison in Yellowstone National Park when they got too close. You can’t negotiate or converse with wild animals, that’s not how Mother Nature works. Rather it is our responsibility to manage wildlife populations which includes hunting, not live, and let live.

As previously discussed, hunting is the careful selection and taking of wild game, not the indiscriminate “murdering” of animals as some would like you to believe. The anti’s like to use the term “murder” to attach human emotions to their twisted and wrong view of hunting.

A common misconception about hunting is that hunters are successful all the time. The only 100% success I’ve enjoyed hunting is just being out there in the great outdoors and the process of hunting. Regardless of whether I am hunting alone or with friends or family, in great or poor weather, I always enjoy it. In actuality, if you were to measure success by the days we harvested an animal versus how many days we spent hunting, our success rate would be incredibly low.

As an example, my elk that I previously wrote about took me 10 hard days of hunting before I got him for a 10% success rate. The black bear I also previously wrote about? It took me 13 days over 3 different hunts and 2 different states before I got one. That is 8% successful. Over the course of my 40 plus years of hunting, it has been rare to ever harvest a big game animal on the first day out.

One thing that surprises many people is when they ask me why I hunt. I tell them one of the main reasons is because I care about wild game. That may sound counterintuitive but allow me to explain.  I watch game year round, always enjoying seeing them regardless of the season. Who doesn’t enjoy seeing the newborns in the spring and throughout the summer?

Nobody in their right mind would want to see animals starving to death or dying of thirst, so I help. I have helped put in water guzzlers in three different states and assisted in burning off invasive plants. And in turn walked many miles reseeding the land with native, healthy grass. All in the name of improving habitat for ALL animals, not just the ones I hunt.

If we did not hunt, the animal populations would fluctuate wildly. Wild lands cannot support an infinite number of animals and eventually all edible vegetation would disappear. This is called carrying capacity. Then a severe, slow, painful die off would occur as game would starve. Nobody, especially hunters, would want that to happen.

Want to talk about another misconception? Ask someone their opinion on trophy hunting, a hot button for many. It is normally misunderstood and/or misinformed, intentional or not, that opinions about it are formed. For example, a hunter goes on an African safari and takes several animals and then proudly takes photos with them. What most people don’t see is what happens to the animals afterwards.

No meat is wasted even though it’s not permissible to export it out of the country. In reality some is eaten in camp or at the lodge but the vast majority of it is given to the local villages. I have seen any number of videos, talked to hunters who have been on safari, and read other articles that this is common practice. The vast majority of states and countries have wanton waste laws where the wild game meat must be retrieved and salvaged. Meaning you cannot just take the head/antlers/horns and leave the rest.

All the public sees are the pictures, so the anti’s take it and run with it, making up their lies along the way. Everything there is eaten such as elephant, cape buffalo, hippo, giraffe, zebra, impala, warthog and yes, lion. Protein of any kind is not wasted. Also, the money that the hunters spend on safari is used by the outfitters to employ the local population, improve roads, build schools, dig wells, etc..

In today’s world, wildlife must have value, especially to the local people that live nearby in the form of food and/or income. If animals don’t have value, the wildlands they live in will be turned into housing subdivisions or put under plow. Hunting provides the monetary incentives and creates the value.

What I have learned, and some hunters still need to, is that the non-hunting populace is the majority. Our actions impact them as well, sometimes positively and sometimes negatively. Most people don’t share our enthusiasm for hunting, and we need to be mindful of this. Where we have hurt our cause with this sector is by the displaying of animals poorly. Pictures with bloody mouths, gaping wounds, tongues hanging out although real, shouldn’t be displayed.

Nor should the mostly gone habit of driving around town with a gory animal in the back of an open tailgate pickup showing it off. Not everyone needs to see that, and we should remember that. Also, avoid the old “hero picture” of standing with one foot on the animal or posing with it still on the game poll.

When out hunting ANYWHERE be sure and pick up after yourselves. The only evidence of your being in an area should only be the tracks you leave behind. If in a vehicle, don’t rut up a farmer’s fields and be sure and stay on designated trails and roads. The land we are hunting on should be respected as much as the game we are pursuing. Without the land there would be nothing to hunt so don’t be a slob.

A much more positive manner in our public handling of harvested game needs to happen. Actions like donating excess wild game meat to charitable organizations and food banks is a better reflection on us. Before taking pictures, clean blood from the face and exterior mouth, hide the tongue or cut it out. I have made these picture taking mistakes myself but have learned from them.

We need to promote other positive aspects of hunting such as proper firearms handling. Life lessons that hunting has taught me, and many others are an increased appreciation for wildlife and wildlands, conservation, patience, perseverance, respect, honor, safety, and doing the right thing when no one is looking, just to name a few. These things should be promoted and publicized.

What we should do is take the high road in our dealings with each other, non-hunters, and the anti-hunters. At the same time, we need to be at the forefront in protecting our hunting rights and heritage for ourselves and future generations. Stay active and up to date when referendums and laws are on ballots for and against hunting. Occasionally the different state and federal agencies will put topics out for public discussion before creating new policies. Watch for these and be sure to comment.

The passion for our way of life and our hunting rights should be of utmost importance to us all. We are responsible at the local, state, and federal levels for them. I’d suggest joining any number of hunting conservation organizations to become a member and give our cause a vocal platform. Organizations like the Mule Deer Foundation, Rocky Mountain Elk Foundation, Western Bear Foundation, Wild Sheep Foundation are several I’d recommend. In particular Safari Club International and Dallas Safari Club are two that vigorously defend hunters’ rights. Most of these also have local chapters that you can actively participate in, make new friends, and help wildlife conservation.

We must unite to protect this fantastic privilege of ours.