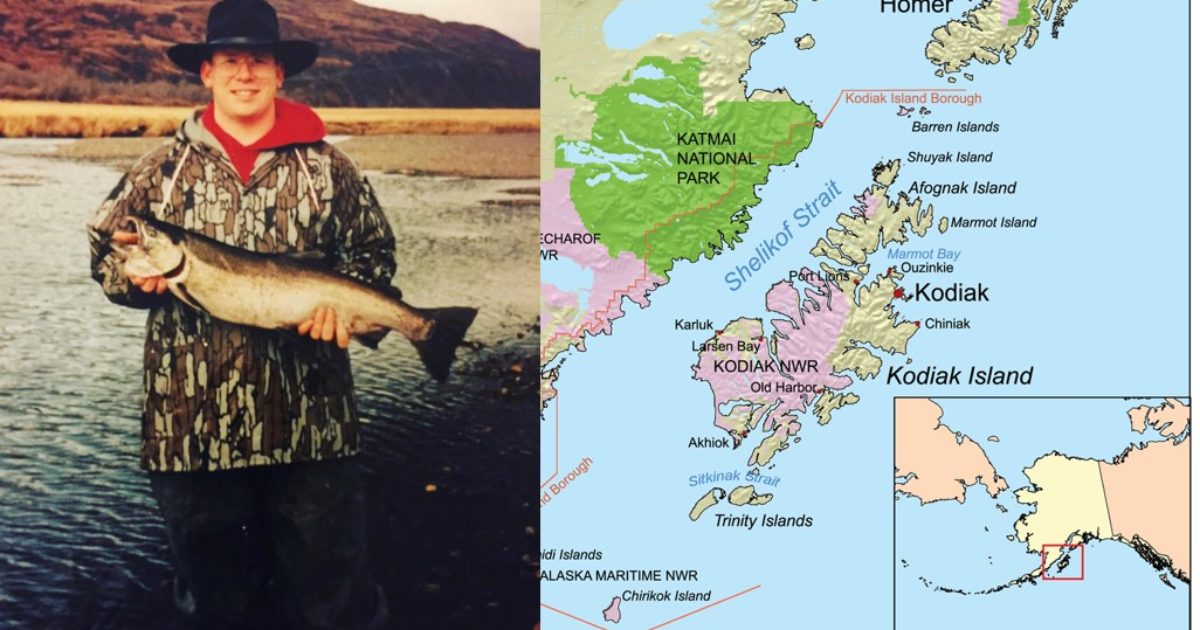 The overcast day actually helped with the lighting on the river. No reflections meant there was no glare from the sun as I checked different locations for salmon. Being within a few hundred yards of the mouth of the river, the tides still affected the water level. My polarized sunglasses enabled me to see into the depths, especially at low tide, and I found schools of salmon. They were in deep pockets inside sharp curves along the riverbank and behind the occasional root system of a downed tree.

It was August and there were three species of salmon in the Olds River on Kodiak Island at the time. We had Coho (silvers), pinks (humpies) and chum (dogs or calico) and the trout species Dolly Varden. The salmon were intermixed in the pockets so when you cast into them you weren’t sure what you’d catch. As I cast above them and brought the neon green pixie down I watched as it disappeared into the dark. A few visible fish lazily moved out of the way until I felt the SLAM of my lure!

I didn’t really need to set the hook, but I did a little just out of habit. The buck silver rocketed up out of the water three feet, shaking his head, trying to unhook himself. All I could say was WOW as he came down and turned downstream to start his run. Fortunately, there wasn’t any brush along the bank, and I was able to move downstream with him. He seemed to pick up speed in the shallow water but didn’t have the depth to jump so he porpoised.

After traveling 40 yards downstream he turned 180 degrees and started back upstream as I felt him shake his head. He obviously wanted nothing to do with landing in my net or on my grill! Ten minutes later, three more short runs and one smaller leap and his fight was done. I was amazed at his size and beauty, even though he was a little beat up from his journey. He was the first silver I had ever landed (individual picture) after losing three previously in similar hard fights.

Growing up catching largemouth bass, crappie, white bass, bream/perch, and the occasional small catfish, salmon were a new experience for me. New friends I made on my 14 hour ferry ride from Homer to Kodiak schooled me on fishing for them. They had been stationed in Alaska before but were also new to Kodiak. Within days I was set up with the proper fishing gear and lures to use for fishing salmon and dollies. The strangest thing happened when my moving sponsor Pat called one evening about 9:30 and asked what I was doing.

Confused and curiously I said, “getting ready for bed since I’m working tomorrow.” He resounded with a “no you’re not, get your fishing gear and get dressed, I’ll be there in 15 minutes!” Not one to turn down an opportunity, I quickly dressed and gathered my stuff and waited on the front porch. It was like a scene from a movie, Pat rolled up, pushed the passenger door from the inside and said “get in.” I laughed and opened the back door to his SUV, put my gear in the seat and he started rolling.

Closing the door, I quickly jumped in the passenger seat and we were off while still shutting my door. He said there was a new run of pinks coming into the Buskin, the closest river to the base. The drive was less than 10 minutes to the river, and we saw only 2 cars in the parking lot. I remember getting out of the vehicle and looking at my watch, it was just before 10 and still daylight. Smiling and shaking my head in disbelief, we made our way down to the river and could see salmon everywhere.

We only fished for maybe 45 minutes and caught our limit with the sun still shining. Welcome to Kodiak! Since the pinks had just arrived and were less than 100 yards from the mouth, they hadn’t changed colors yet.  They were still the shiny silver color from their time at sea, only changing colors in fresh water. Male salmon in Alaska also develop a hooked lower jaw called a kype which is used in sexual dominance hierarchy.

The chum salmon, also known as dog or calico salmon, are also hard fighters with the males growing canine teeth. Depending on who you ask, the nickname “dog” is given to them because of these teeth OR because they’d only feed them to their dogs. Most people consider them to be the least appetizing of the Alaskan salmon and can them in lieu of grilling. Both sexes grow vertical purples stripes once in freshwater giving them the calico appearance.

During my time on Kodiak the three species I caught were the Coho, pinks, and chum. Unfortunately, I was never able to catch the other two less distributed but popular salmon, the sockeye, and chinook. Sockeyes are also known as “reds or green heads” after they change color in freshwater for obvious reasons. Chinook are also known as “kings” and are the largest salmon in the world. The largest sport caught king weighed 97 pounds, coming from the Kenai River on the Kenai Peninsula.

Depending on which salmon you are after, they are available in and around Kodiak from April through October. August tends to be the prime month to be able to catch all five of the species. If you are interested, rainbow and steelhead trout are also inhabitants of the area. The Dolly Varden previously mentioned are also a blast to catch and eat from the bays. When caught further upstream their colors and flavor also change as they follow the salmon and eat their eggs.

The abundant sunshine in the summer on Kodiak can make for some fantastic days for fishing. The longest days are in June with over 18 hours of daylight for your fishing adventures. To say Kodiak fishing is world class is an understatement. Not only is the sport fishing fantastic there, so is the commercial fishing and very lucrative. In other words, if fishing is your passion, then look no further then fishing for Kodiak salmon.