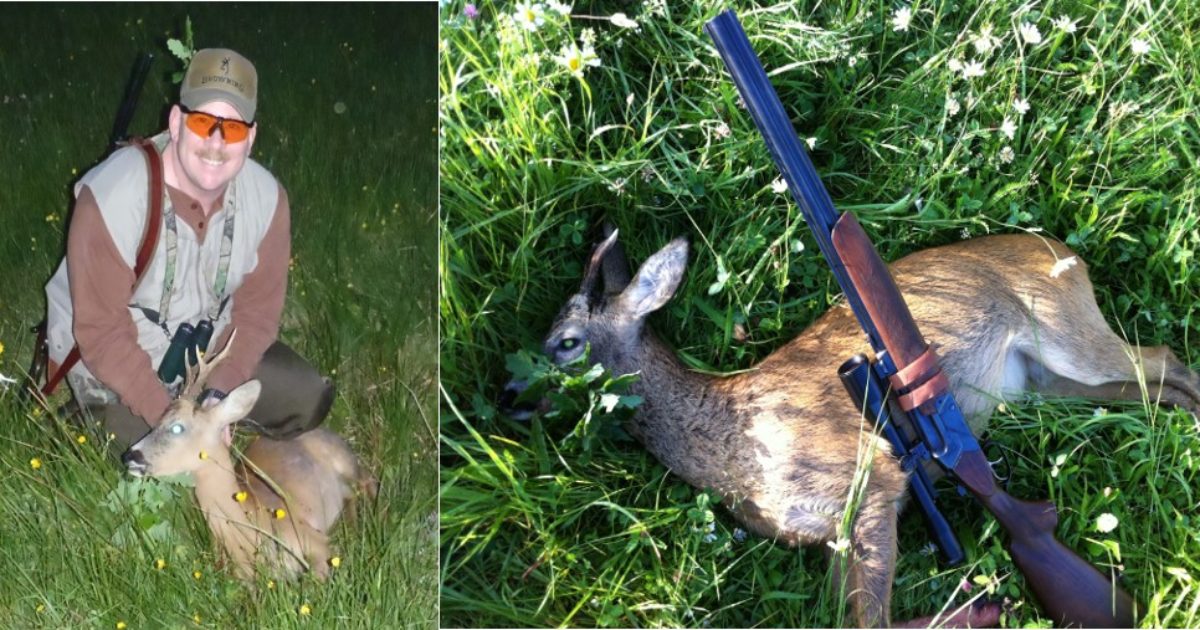 Slipping through the tall uncut weeds, the buck paused at the edge of the German field. Slowly sticking his head out through the opening, he looked for other deer before stepping out. Seeing two does already there, he eased his way into the field and began to feed in the late afternoon. Watching him through my binoculars, I decided I wanted to take him and steadied the .308 in the shooting window. After waiting for him to turn broadside, the crosshairs settled behind his shoulder and I started the trigger squeeze.

Through the scope I watched him collapse in his tracks as the rifle went off with mild recoil (left picture).  Walking the approximate 100 yards to him, I was surprised at his small body size. Although I knew roe deer were smaller than American deer, seeing one up close really hit home. If he were a Whitetail, his head would have been much higher than the weeds when I first saw him. But the European Roe Deer don’t even come close to the size of their counterparts across the Atlantic.

Live weight of a big roebuck, as the German’s refer to them, rarely exceeds 70 pounds. Their antlers don’t get very larger either and typically a mature buck has only 3 points to a side. They are indigenous to Europe and some species of roe are also found in the middle east, Russia, and China. Upon completing my three month long German Hunting Course, my Jagerbrief (hunters’ certificate) qualified me for a Jagdschein (hunting license). Roe deer was the first animal I hunted, and they were plentiful, seeing them daily on my work commute.

Deer season started May 1st and ran through the end of December. The rut for roe deer is from mid-July to mid-August with does delaying implantation until January. Fawns are born in April and May instead of the middle of winter for better survival. My first buck was taken on May 14th, a dry doe a week later and then on July 4th another doe. I had never harvested anything before on this great day so that was incredibly special for me.

A week later I returned to America for back surgeries two and three, missing the rest of the season. By the time the following season started I had sufficient time for recovery where I could hunt from stands. Knowing this would be my last year in Germany I wanted to hunt as much as possible.  Fortunately, I was invited to go on several driven hunts by German hunting friends, but these were for wild boar. When I did hunt roe, it was on a revier/lease that I had permission to hunt by my neighbor.

July 5th I was walking through heavy fog down a dirt path towards a stand I planned to hunt. Trying to walk quietly down the moist dirt track, I started to see something orange through the fog. Raising my binoculars, I saw a buck feeding in the field out in front of my stand. Silently easing my way forward another 10 yards, I slowly set up my shooting sticks. The buck actually started to feed my way as I rested my rifle in the stick yoke.

Taking a deep breath, I found the three pointer in my scope, took the safety off and slowly exhaled. At the shot, the buck did a complete back flip, kicked once and was dead, 44 yards away. Without field dressing him, I tied his legs together at the ends and slung him onto my back. I had a hunting pack on one side and a deer pack on the other and hiked out. That is an advantage to hunting these small deer!

A week and a half later I hunted a new place that I had just been permitted to access. What I didn’t know was that the small revier was only on the side of a hill between two others. The one revier was on the top of the hill where it rounded off and covered the backside. The other was at the bottom of the hill where it flattened out. There was only one stand on the revier I was going to hunt so my location was already decided.

The hillside was covered in heavy brush with two small grass openings in the middle of it all. I wound up hunting that revier four times without seeing a thing, but it was close to where I lived. The fifth time was a beautiful day and I wanted to get out. Climbing into the stand, I wasn’t expecting to see anything yet again as I settled in. Sitting back with the sun on the side of my face I felt happy, comfortable, and relaxed.

As I soaked the afternoon sun in, I occasionally sat up and looked around, then returned to my comfy spot. For an hour I did this, only hearing birds and the occasional tractor in the distance working a field. I am not sure how many times I sat up to scan the area after these restful periods. When I did the last time, I was surprised to see a deer in one of the openings. Through my binoculars I was able to see he was a plump spike.

The opening wasn’t big, maybe 15 yards across and 72 ranged yards away with thick green brush all around it. I rested the rifle on the small sandbag I brought and placed in the shooting window. While I waited for the spike to give me the proper shot angle I felt a sneeze coming on! Talk about lousy timing! I held my nose with one hand, peering through the scope and trying to not blow the shot.

When the urge to sneeze finally subsided, I settled in to take the shot before it returned. The spike was near the edge of the opening and still feeding. When I fired he leaped forward into the brush and was gone. There was still an hour and a half of daylight left as I climbed down to go look for him. Arriving at the shot location I immediately found blood where he stood and where he entered the brush.

What surprised me was how dark it was inside the brush as I started my search. Using my headlamp and flashlight while bent over looking for sign, 10 minutes and 20 yards later I found him. He had imbedded himself in the bushes in his fatal escape and was more difficult to find then I expected. Dragging him out was a small workout and he turned out to be pretty buck and later, very tasty (right picture)!

Before I knew it, my time in Germany was coming to a quick end. I still had some venison, duck, and wild boar bratwurst left that I couldn’t bring back to the states. So, I decided to have a going away feast with my German and American friends at my favorite Gasthaus. It’s owned and operated by my friend Gilbert who is a fantastic chef. He did a phenomenal job with all the wild game and we had a great feast and camaraderie.

I was also able to hunt roe deer in Czech Republic twice and Poland once while stationed in Germany.  Lots of beautiful country but didn’t harvest anything on those trips as I was holding out for an exceptional buck. One pleasant surprise I received was discovering my first buck I harvested actually made the Safari Club International record book! I’ve never hunted an animal specifically to make a record book, if it happens, it happens.

If you ever get to make a trip across the Atlantic, I’d highly recommend a hunt for roe deer. Guided hunts are affordable and lots of fun pursuing the diminutive distant cousin to the Whitetail. Then, find you a local chef and have them prepare the meat, you’ll love it!