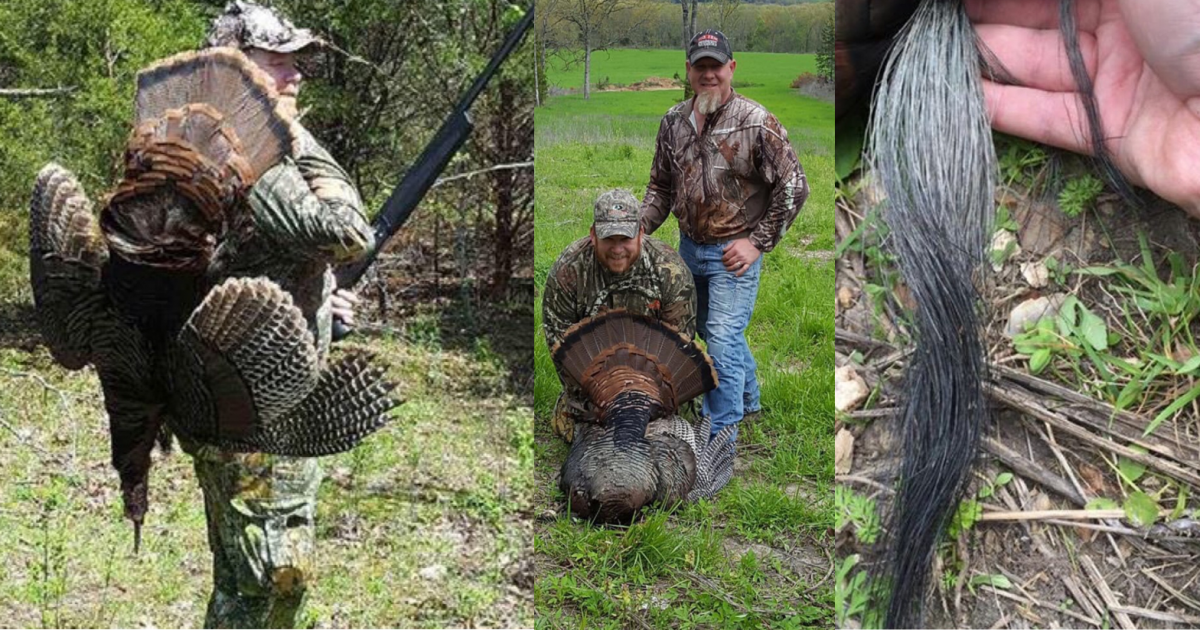 Ahh springtime, warming temperatures, plant life greening up, evening storms, and my favorite, thunder chickens gobbling! Depending on what states you hunt, the season can start as early as February and go into June. And with four species of turkeys available across 49 of the 50 states, there are lots of opportunities. Who’s my choice to hunt with? My veteran buddy Randy Hargis, the Turkey Whisperer.

Randy and I met at Fort Leonard Wood, Missouri in late 2012 when we were assigned to the Warrior Transition Unit (WTU) together. Striking up a quick friendship, we found out we both had the same passion for hunting anything. Being a Missouri native, Randy knew the lay of the land and had connections to hunt just about anywhere. As it turned out, our mutual friend “Doc” Metzger had the best turkey hunt land around only 30 minutes away.

Doc was also assigned to the WTU and has a 1500 acre family farm. That farm is 2/3 hardwoods and 1/3 hay pasture with some cattle on it and holds big whitetail and turkey. Because of our schedules, I didn’t get to hunt with Randy while we were stationed there. But he did take a new to turkey hunting friend of ours out twice while there. Tim shot two birds on two separate days within the first ½ day on Doc’s farm.

Tim was elated but I told him not to get used to that because that’s not normal. As it turns out when you hunt with Randy, that is normal. Unfortunately, we didn’t get to hunt together until after we left the Army in 2014. Fast forward to 2016 and we were able to set up a hunt on Doc’s place in the middle of the second week of the season. During the beginning of that week, Randy took his wife out and she got two birds in quick order.

I was beginning to see a pattern but still wasn’t completely convinced.  During the five hour drive to meet Randy I wondered if I’d finally be able to get a big tom. I had hunted turkeys before but only ever shot jakes (first year tom’s). After meeting up with him, he told me not to worry about it, he’d get me on the birds. We checked into our hotel room and went over the game plan for the next day.

Surprisingly, we weren’t going to get up at zero dark thirty to get into the turkey woods before dawn. We got up at 7:30, had breakfast and got to Doc’s place and in the blind at 9:00. This is definitely not how I’d ever hunted turkey’s before and in Missouri, shooting hours stopped at 1:00 p.m. daily. To say I was scratching my head about getting such a late start was an understatement, but I trusted Randy.

We settled in on the edge of a long narrow pasture that opened into a bigger field that had a pond on the opposite side. It was a beautiful morning, no clouds anywhere and we could hear 3 different gobblers in the distance. Every time Randy called we got multiple responses but nothing that seemed to be working in our direction. Around 10:45 we saw a tom following a hen at the far end of the field, but he ignored us. At 11:30 we decided to leave the blind and see what we could find slipping along quietly.

After making our way across the field to the back side of the pond, we found a 4 wheeler trail to follow while calling. Slowly working down the road, we got no responses for the 200 yard length of it. Once we got to the straight end of it, it dropped off down into a small valley. Instead of dropping down into the valley, we started calling our way back up the trail. Wouldn’t you know it, halfway up the trail and we had a gobbler returning our call, and he was close.

Listening to the direction of his calls, he was moving uphill towards us from the valley below. I sat down with my back into a bush on the valley side of the trail, Randy behind me. The tom’s calls were closer every time he thundered, Randy working his magic with his hen calls. There was nothing loud or overt about his calling to the tom, more like whispering music. And it was working.

He knew when to be quiet and let the thunder chicken continue to work and call his way in looking for the hen. As the tom closed, his gobbling was so loud I could feel the vibrations like through a loudspeaker. Peering through the underbrush and trees I eagerly waited to see movement, and there he was. I thought he had three legs, but it was his long paint brush of a beard that threw me off. He was behind a cedar tree moving from left to right, maybe 35 yards away.

What I didn’t realize until after I sat down was that I was on the edge of a game trail. It bisected the old road we had walked in on and that’s where he walked out and stopped. When he did he was in the wide open and stuck his neck up, looking for his love interest. Not waiting, I aimed for the base of his neck and my Browning Maxus 12 gauge BOOMED! He was down and in his death flop and all I could hear was Randy behind me hollering yee haw!

Standing quickly, I moved up to keep an eye on the bird to make sure he was finished. I’ve seen too many videos and heard too many stories of turkey’s only being stunned and running off. He was done and down for the count. The next thing I remember was Randy next to me slapping my back in congratulations (Randy and I center pic)! What a beautiful bird he turned out to be!

He was a huge tom (far left pic) with double beards, the paint brush measured over 11 inches and the other 8 inches (far right pic). I could not believe it and was stunned. The turkey whisperer had done it yet again and now I was a believer! He truly understands them and speaks their language. The best part of it all, was hunting with a veteran buddy that shares the same love for the outdoors.