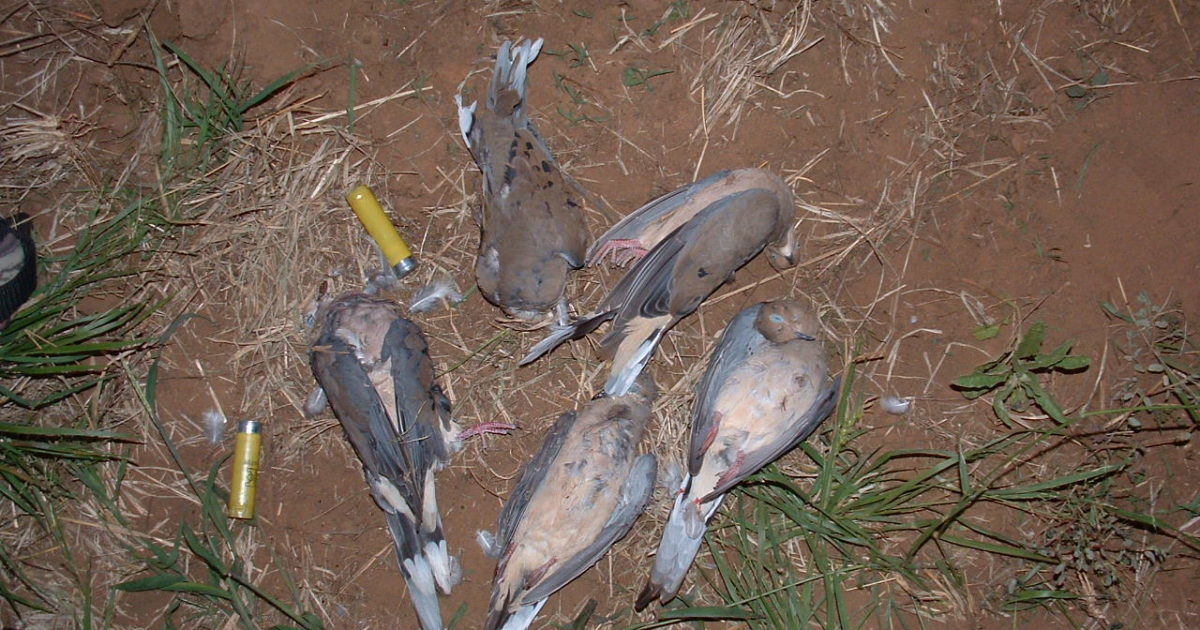 Tucked back into the shade of a big mesquite tree, I waited for the whistling buzz bombs to arrive. I could see the banks of the stock tank over the dam as the sun rose high behind me. The morning was heating up this first day of September in north Texas as the sweat ran down my back. My lips felt parched as I thought about the cold Gatorade I had in my truck’s ice chest. My daydreaming was abruptly shocked back to reality when two dove landed on a branch four feet above me!

They landed so loudly I thought they were going to alight on the barrels of my side by side 20 gauge! I readied myself, took three steps out from under the tree and the dove rocketed out of the top. They split into different directions as I picked the one that stayed on my side and started my swing lead. My first shot was definitely behind as I mentally kicked myself for missing badly and swung ahead faster. Correcting my lead and squeezing the trigger, the dove violently juked up and all I clipped was one tail feather!

That dove lit out like its tail was on fire and I distinctly thought I saw it flip me the bird! The action picked up as more came in to water on the tank in singles and pairs. I would like to say my shooting improved, but I didn’t get a dove until halfway through my shells. Finally figuring out the proper lead, I did eventually drop three more before I emptied the box of 25. One bird in six shots wasn’t too bad and it sure was fun and literally a blast!

One of the first fall seasons to open across the nation is the annual dove opener. It is also a great way to start new hunters with lots of action and can be done in groups. There are several species of dove in North America with the Mourning Dove being the most common and widest ranging. They are a migratory bird, but some individuals and small groups do occasionally homestead, especially in southern states. Another added bonus to the fun of hunting them is that they are extremely easy to clean and taste great.

The best time to hunt them is in early season when there are so many, and they haven’t been hunted.  It doesn’t take long for them to get educated to being shot at and change their flight patterns. During early season use 7 ½ or 8 shot in an improved choked shotgun in anything 12 gauge or smaller. Later in the season switch to 6 shot and a modified or even full choke for further shots when the birds won’t come in as close.

I really enjoy using decoys in the trees around me to give the birds confidence to come in. They really amaze me when they come buzzing in with their aerobatics, very similar to teal. Like dusky colored dive bombers, twisting and contorting themselves to dodge real and perceived incoming pellets.

Baiting for them is illegal but they are attracted to sunflowers and millet. Be sure and check the regulations in your state for when you cannot harvest crops near dove season. They typically water twice a day, roosting in the heat of the day and aren’t difficult to pattern. Like most species, find their food and water sources and where they roost and plan your hunt.

The next day I moved to a different mesquite tree south of the tank, not wanting the birds to predict my location. I sat on a camouflaged five gallon insulated bucket with ice in it and a swivel seat attached on top. Using burlap staked in front of me in a wall blind, I settled in and waited for sunrise. The sounds of the Texas morning started to come alive as the sun hemorrhaged blood red in the east. Three dove came in landing on the dam in front of me, tiny puffs of red dust appearing beneath them.

I watched them water and interact with each other for a few minutes, waiting for more to come in. Two pairs landed next to them, pecking at the ground, and squabbling amongst themselves. They were actually noisy in their arguing and posturing for whatever the issue was and didn’t see me rise. My shotgun came up naturally to my shoulder like an extension of me as I flipped the safety off. Catching them completely off guard, I took one step forward and the red dirt exploded with their simultaneous launches.

With only two shots available, I picked my first shot carefully and sent a discharge above the three. As if in slow motion, they rose right up into it and all crumpled at the intersection of flight and shot. The surprise of seeing all three drop delayed my second shot for a few moments before searching for new targets. The furthest dove to my right glowed, back lit by the sun as I swung up and over it. As the shotgun recoiled, the bird disappeared under the barrels momentarily while I swung them out of the way.

It also dropped out of the sky surprising me as I’d never accomplished a pair of shots like that before.  But I was humbled as the morning continued and I missed several other opportunities as birds came in to water. Calming my frustration, I took a break and recovered the birds and got a drink of Gatorade from my bucket. Regaining my focus, I took the last bird that came in that morning before lunch. What a great morning.

Another great dove hunting experience is to travel to Argentina for a week at one of the outfitted lodges there. Friends have traveled there and talked of the phenomenal high volume shooting with some taking 5,000 dove in one week. The dove in Argentina are considered pests and are extremely hard on the crops. You rent two shotguns and purchase your shells there, plus you have someone to load while you’re shooting. The meals are out of this world and so is the local accompanying wine I’ve been told.

If you’ve not tried dove hunting you should as it provides lots of fun for everyone, and great table fare. The hunting is not difficult, they are easy to clean, and lots of fast action for all. And as always, the camaraderie is fantastic pursuing the dive bombing doves.

My favorite method for dove is using my jalapeño popper recipe and yes, it is spicy.

Start by marinating the halved breasts overnight in smoked chipotle tabasco sauce in the refrigerator. The next day, prep the jalapeños by cutting the stem end off and slice them once, lengthwise down the middle. Then, use a spoon and scrape out the seeds and membrane to create a canoe. Next fill the canoes with cream cheese and place a breast half on the cheese. Lastly, wrap each with half a piece of thick cut bacon, holding it all in place with a toothpick.

I have baked them before but grilling them is much better, especially if you use mesquite chips or mesquite briquettes. Grill them until the bacon is done, remove, at let them sit for 10 minutes. Grown men have actually fought over the last few at a party I helped with. I have substituted other sauces and peppers for those that don’t care for the heat, but they’re not as good. Stick with spicy, you will thank me later.