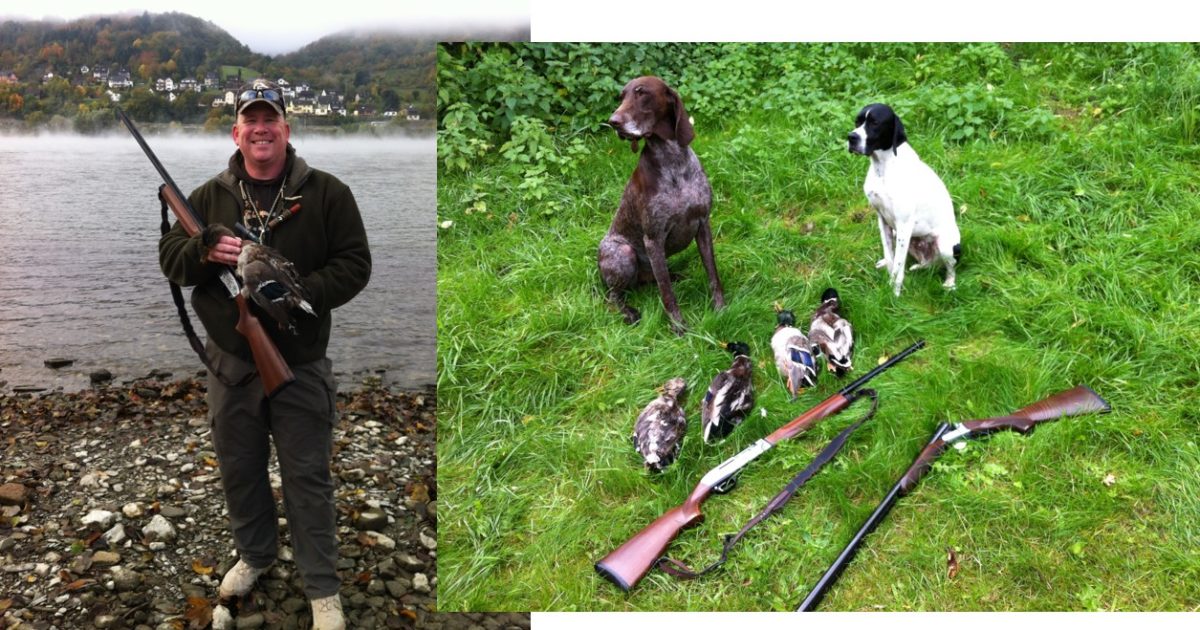 Crouching behind the tall grass in our hasty, makeshift blind, my buddy Rick and I waited and watched, shotguns ready.  His golden retriever Gunner whimpered with excitement as our buzzing targets made their way upriver, just above the surface.  Like a squadron of small fighter jets, they banked hard following the contours of the winding river unaware of us. Just coming into range, Rick yelled “take ‘em” as they closed onto our location along the bank. By the time we stood they were almost on top of us and close enough to hear their wing beats.

Although we knew they were there it was still surprising to see them nearly in our faces! The lead drake was so close I could see the color in his eye as I started my swing.  I had to get out in front of him quickly for the shot before they kicked in the afterburners. Squeezing the first shot, I saw him and an immature drake behind him crumple, splashing and skipping across the surface.  Rick’s shot was a half second behind mine as I saw two more in the back fall out.

Just as I began my swing at the rest of the flock, they flared up and we both missed. The remaining four Barrow’s goldeneye split into two groups and went in different directions. I dropped a hen with my last shot and Rick didn’t shoot, giving Gunner the command to fetch. A blonde flash out of the corner of my eye launching into the river with the eager retriever splash. It was great to watch him pick the birds up with all the athleticism he had.

Rick was grinning proudly as that was Gunner’s first retrieve of the year, praising him as he swam back in. Shotgunning the Kodiak Island rivers for the many different varieties of waterfowl was literally a blast. At the time I was new to duck and goose hunting Alaska but was fast becoming addicted to it. It had been years since I first duck hunted in Arkansas and was quickly reminded how much fun it was.

The few times I hunted Arkansas was for mallard and green-wing teal. Kodiak I found out had them also, along with other puddle ducks, divers, and fantastic sea ducks. Ducks were my primary source of hunting Alaska in my first year as I waited to become a resident. And it was a great way to learn about the outdoors in a new rugged land. In Alaska, dogs are not the only retrievers there as I lost several ducks to eagles and sea lions.

Years later when I duck hunted Germany there weren’t any golden or Labrador retrievers around. The preferred dog for most hunting of any kind was, you guessed it, the German Shorthair Pointer (GSP). They are trained to be very versatile dogs, able to hunt many different species including roe deer. It took some time getting used to seeing them duck hunting and filling the traditional retriever role. But the ones I was privileged to observe were extremely athletic and more than capable.

I was pleasantly surprised that we hunted for mallards as I didn’t know they were also found in Europe. Duck hunting isn’t as popular there as it is here in the states, so the hunting pressure was next to nothing. This made calling them less difficult and lots of fun. There is really something special about watching a flock fly over and see them turn and come into your calling. We hunted the famous Rhine River that begins in Switzerland flowing north through Germany, the Netherlands into the North Sea.

There is very little wild land left in Germany so almost everywhere you hunt civilization is nearby. It was strange to hunt with homes and buildings nearby as I was used to more remote locations. Because of this we had to be very careful in our shot location selections. Hunting is primarily jump and pass shooting the rivers and I never saw a duck blind in my years there. Because of the military connotations of camouflage, most hunters don’t wear it, opting for solid earth tone colors.

My American buddy Robert that I hunted with, had only learned to hunt since arriving in Germany. The first time we duck hunted together I looked at him strangely when he put on his fluorescent orange hat to walk down to the river. He did not know that ducks weren’t color blind like most animals. We laughed as it dawned on him that maybe that’s why he hadn’t had much prior success duck hunting.

We hunted with his friend Sarah that owned the GSP and another younger one in training. Finding a vantage point on a bridge, I glassed for ducks and found two flocks downstream about 100 yards apart. As I moved off the bridge I noticed a lone duck at the mouth of the creek flowing under it. Robert and Sarah were already on the move to go after the flocks several hundred yards away. Using the cover along the creek, I jump shot my first German mallard, a hen, in the shallows (left picture).

Picking her up quickly, I hustled down the path to catch up with the others. One flock was on our side of the river and near a series of levees, so we focused on them. It was strange to be stalking down the walking and bike path with our shotguns and dogs. We got some interesting and strange looks from the other recreational users who passed us.

Once we got to the levees there was no cover to hide any more of our approach. So, the only thing we could do was to amble our way out casually and nonchalantly onto the nearest one. Surprisingly, this actually worked rather well, although they did start to swim away from us a little. We were just inside range when the first nervous drake launched into the air and we opened fire. As quickly as it started it was over as Robert dropped his first ever drake and I got two (right picture).

It was fantastic to watch Sarah’s big GSP athletically retrieve those ducks. One splashed down not far away and the other two landed out in the main part of the river. He started for the closest one but using her whistle and hand signals she changed his direction. She knew he needed to go after the others first before the current took them away. He actually picked up both birds on the same retrieve and swam back upstream 200+ yards to where we were.

The commonality of hunting ducks in two vastly different locations and conditions was incredibly unique indeed. But one thing is always present and consistent, and that’s the camaraderie of the hunt itself. That’s duck hunting.