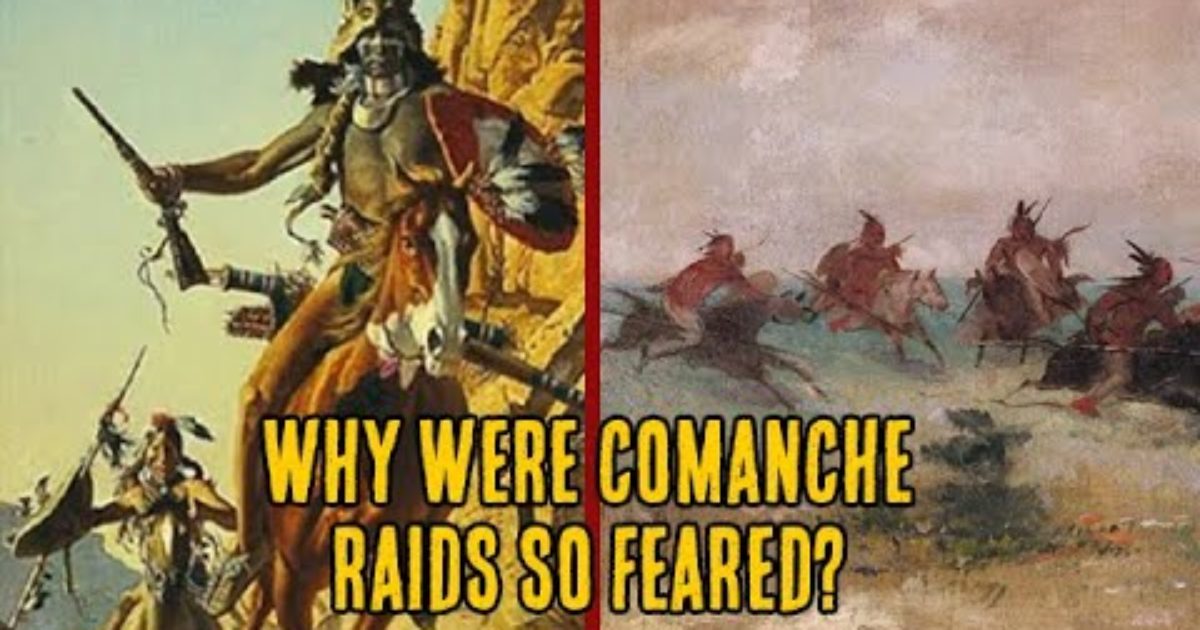 When we think of the history of this great nation, one cannot do so without including the history of the indigenous peoples of the North and South American continent. In fact, without them our history would not only be incomplete, but quite frankly, it would be boring as all get-out!! Native Americans are a major part of our lives and for some (my family included) they are a part of us and our families. My Grandfather was born on the Cherokee reservation in Oklahoma at the turn of the 20th century and when he was 16 years old, left reservation life to live in the white-man’s world and it was in the state of Texas, that he met and married my Grandmother.

The Comanche were a North American Indian tribe of equestrian nomads whose 18th- and 19th-century territory comprised the southern Great Plains. The name ‘Comanche’ is derived from a Ute word meaning “anyone who wants to fight me all the time” and fight they did, the Comanche were not only feared, but were respected by their enemies. Highly skilled Comanche horsemen set the pattern of nomadic equestrian life that became characteristic of the Plains tribes in the 18th and 19th centuries.

Comanche raids for material goods, horses, and captives carried them as far south as Durango in present-day Mexico. With their adoption of horses in the early eighteenth century, allowed the Comanches to build a lifestyle based on buffalo hunting, horses thus helped the Comanche hunt the massive herds of buffalo needed for their growth.

The Comanche tribe were renown as excellent horsemen. They fiercely fought against enemy tribes of Native Indians and resisted the white encroachment of the Great Plains. The names of the most famous chiefs of the Comanche tribe included; Chief El Sordo, Chief Buffalo Hump, Quanah Parker and Chief White Eagle.

About the Comanche Wars according to Wikipedia:

“The Comanche Wars were a series of armed conflicts fought between Comanche peoples and Spanish, Mexican, and American militaries and civilians in the United States and Mexico from as early as 1706 until at least the mid-1870s.
The Comanche were the Native American inhabitants of a large area known as Comancheria, which stretched across much of the southern Great Plains from Colorado and Kansas in the north through Oklahoma, Texas, and eastern New Mexico and into the Mexican state of Chihuahua in the south.
For more than 150 years, the Comanche were the dominant native tribe in the region, known as “the Lords of the Southern Plains”, though they also shared parts of Comancheria with the Wichita, Kiowa, and Kiowa Apache and, after 1840, the southern Cheyenne and Arapaho.
The value of the Comanche traditional homeland was recognized by European-American colonists seeking to settle the American frontier and quickly brought the two sides into conflict.
The Comanche Wars began in 1706 with raids by Comanche warriors on the Spanish colonies of New Spain and continued until the last bands of Comanche surrendered to the United States Army in 1875, although a few Comanche continued to fight in later conflicts such as the Buffalo Hunters’ War in 1876 and 1877.
The Comanche were noted as fierce combatants who practiced an emphatic resistance to European-American influence and encroachment upon their lands.
Comanche power peaked in the 1840s when they conducted large-scale raids hundreds of miles into Mexico proper, while also warring against the Anglo-Americans and Tejanos who had settled in independent Texas.
Their power declined as epidemics of cholera and smallpox inflicted severe casualties on their population, and as continuous pressure from the expanding population of the United States forced them to cede most of their tribal lands.”