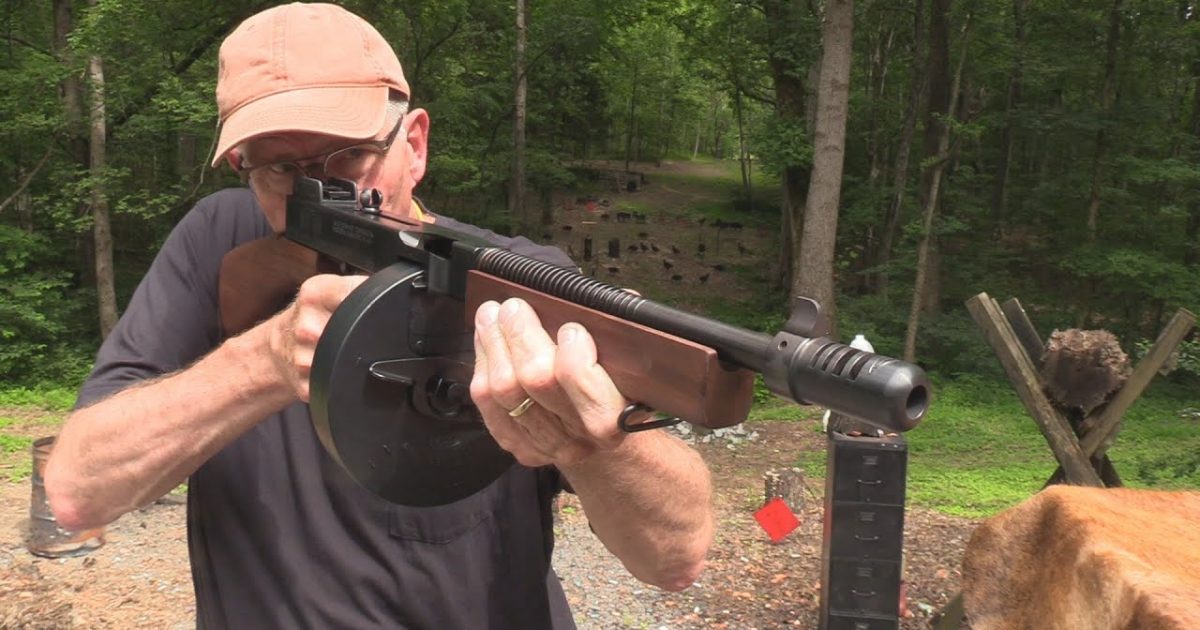 Before you scroll down and watch the video, I thought a little history lesson regarding this weapon would be an appropriate and necessary thing. The reason I like Hickok45’s videos is because they’re not only entertaining, but they are very informative as well, say what you will , but the old boy knows his guns and that’s why almost every video he produces usually has a million or more views. Just so we’re clear and are all on the same page, the weapon in the video below is a semi-auto version of the iconic gun.

A little history about Mr. Thompson and his invention:

“Anyone who has watched an old movie or browsed through a book on World War II will quickly recognize the familiar outline of this fine weapon. That finned barrel topped off with a Cutts compensator, the square receiver, either a drum or box magazine… the famous “Thompson Submachine Gun.” Although “submachine gun” is an familiar part of today’s gun owner lexicon, the word was created by the man who was responsible for bringing us this great gun.

John Taliaferro Thompson was born in 1860 and graduated from West Point in the class of 1882. Upon commissioning, he entered the army in the Artillery, later transferring to the Ordnance Department in 1890. During the Spanish-American War he distinguished himself when he directed the supply of munitions at a time of near chaos in the Army’s ordnance and quartermaster units. 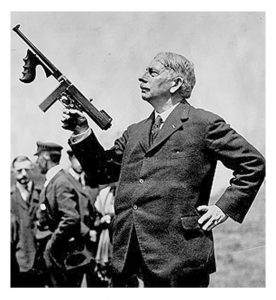 Thompson was involved in the testing and adoption of the Springfield M1903 rifle. He became famous for tests he conducted that resulted in adoption of the .45 caliber as the official U.S. Army handgun cartridge. Various calibers were tested on cadavers. Later, in the slaughterhouses of Chicago, he conducted tests on beef cattle to determine the best cartridge. From these tests it was determined that the .45 was the only acceptable cartridge for a handgun and thus leading to the adoption of the Colt .45 M1911 automatic.

In November 1914 he retired from the service with the intention of devoting his full time to perfecting an automatic rifle. He was to join Remington Arms Company as their Chief Engineer. There he was responsible for organizing the construction, outfitting and operation of a rifle factory at Eddystone, Pennsylvania, to produce the British Enfield rifle. In 1916 he set up another factory to produce Mosin-Nagant rifles for the Russian Army.

When the United States entered World War I, he was recalled to active duty and was instrumental in adapting the British Enfield rifle to .30 caliber and producing it as the M1917. Promoted to brigadier general, he was responsible for the supply of small arms and ammunition to the Allied Expeditionary Force (AEF) in France and by all accounts performed these manifold tasks with the utmost efficiency. As a result, Thompson was awarded the Distinguished Service Medal. In December 1918 he retired from the service for a second time.

Thompson’s primary interest remained the development of an automatic rifle. He believed an “intermediate” automatic weapon in the ballistic class between the pistol and the rifle would be a requirement in future wars. In Thompson’s mind to accomplish this end meant overcoming several obstacles.”

The Thompson short barreled rifle (SBR) is our gun that is closest in dimensions and weight to the original submachine gun made famous during the 1920’s in the hands of gangsters and G-men. Its operation is semi-auto, firing from a closed bolt, and featuring a 10.5” barrel. The frame and receiver are machined from solid steel and the stock is genuine American walnut. The finish is blued steel.

Thompson Short Barrel Rifles must be shipped to a Class 2 manufacturer or Class 3 dealer directly from our factory in Worcester, MA. The transfer paperwork between Kahr Arms/Auto-Ordnance and the dealer (known as a Form 3) must be completed and approved by the NFA branch of the Bureau of Alcohol, Tobacco, and Firearms (BATF), before the Thompson SBR can be shipped to the dealer. The customer needs to pay a $200 transfer fee directly to the BATF. Your local dealer can assist you in this process. For more information on purchasing an SBR, click on the following link at the BATF web site: https://www.atf.gov/qa-category/national-firearms-act-nfa.

Some states do not allow the purchase and transfer of SBRs. Please check the laws in your state regarding ownership of SBRs. A list of Class 2 manufacturers and Class 3 dealers can be found at the following website: www.subguns.com