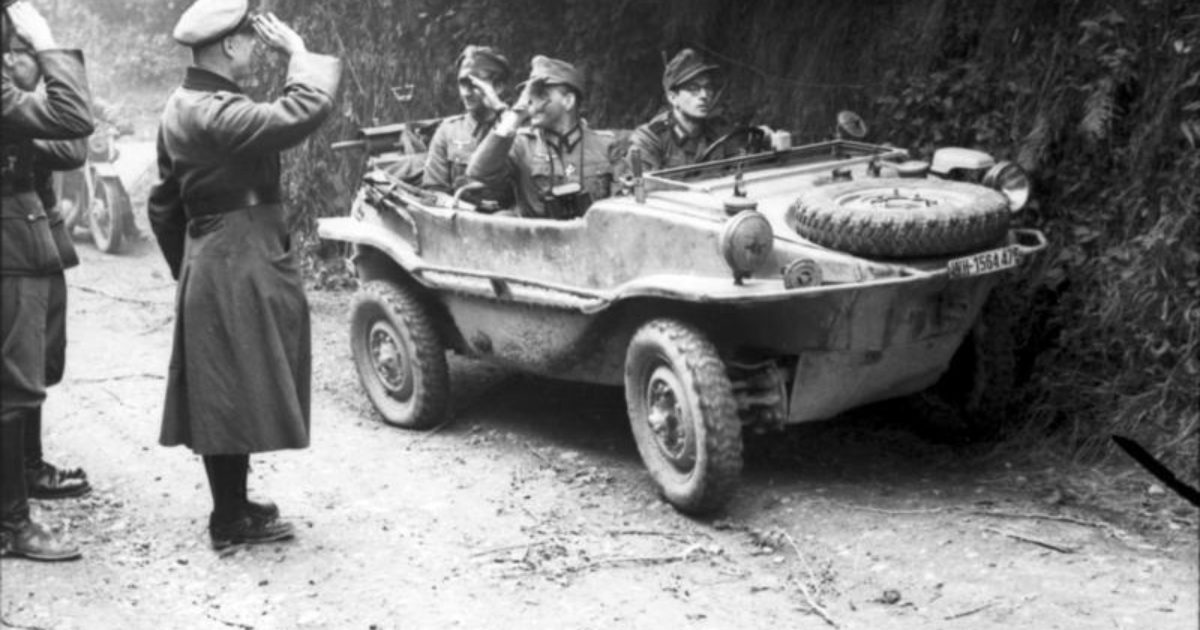 Even though the Nazis were among the most evil people on the face of the earth, the German war machine developed some of the best weapons of the second world war. From aircraft to machine guns and from tanks to ballistic missiles, the technical developments made by the Germans was astounding. And truth be told, it was because of the developments made by the Germans in rockets, that helped put the United States of America on the moon in 1969.

But, I’m getting ahead of myself. There is one invention that really hasn’t had enough exposure…and that was the “Schwimmwagen”.  The Volkswagen Schwimmwagen (literally “swimming car”) was a four-wheel drive amphibious vehicle, used extensively by German ground forces during the Second World War. The Schwimmwagen is the most numerous mass-produced amphibious car in history and the German military put this “swimming car” to good use.

The Schwimmwagen was a sub-product of the legendary Volkswagen beetle conversion into mass production for the Wehrmacht, under the name “Kübelwagen”, literally, “bucket-car”. A new model was studied by Erwin Komenda, car body designer of Ferdinand Porsche, in 1940, to provide an amphibious car. It was a mix of the VW type 86 four-wheel drive model, mixed with elements of the VW type 87 command-car, using the air-cooled “flat-four” boxer and a transmission with four speeds manual, two tranfer case, and a 4WD capability only on the first speed and reverse. The first body designed was based on the usual VW wheelbase, 240 mm (7,9 ft). This prototype initiated the type 128 series. 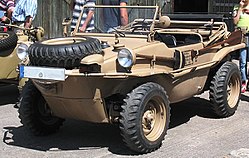 The Schwimmwagen in action

The first of these vehicles equipped SS units on the eastern front and they proved valuable in marshy grounds like in the Pripet, many served also in Wehrmacht units in North Africa and Tunisia, Sicilia, and Europe. They were seen, like the Kübelwagens, in nearly all theaters of war. It was light and reliable and served for scouting, transport, dispatching, command cars, and regular officer cars on the frontline. They were unarmed but proved versatile, sturdy and reliable. Soldiers sometimes nicknamed it “the Frosche” (“frog”). The schwimmwagen remains the most heavily produced amhibious car in history. Its VW mechanical basis made it popular after war, and 166 survived to this day in museums, private collections, and often in running conditions.