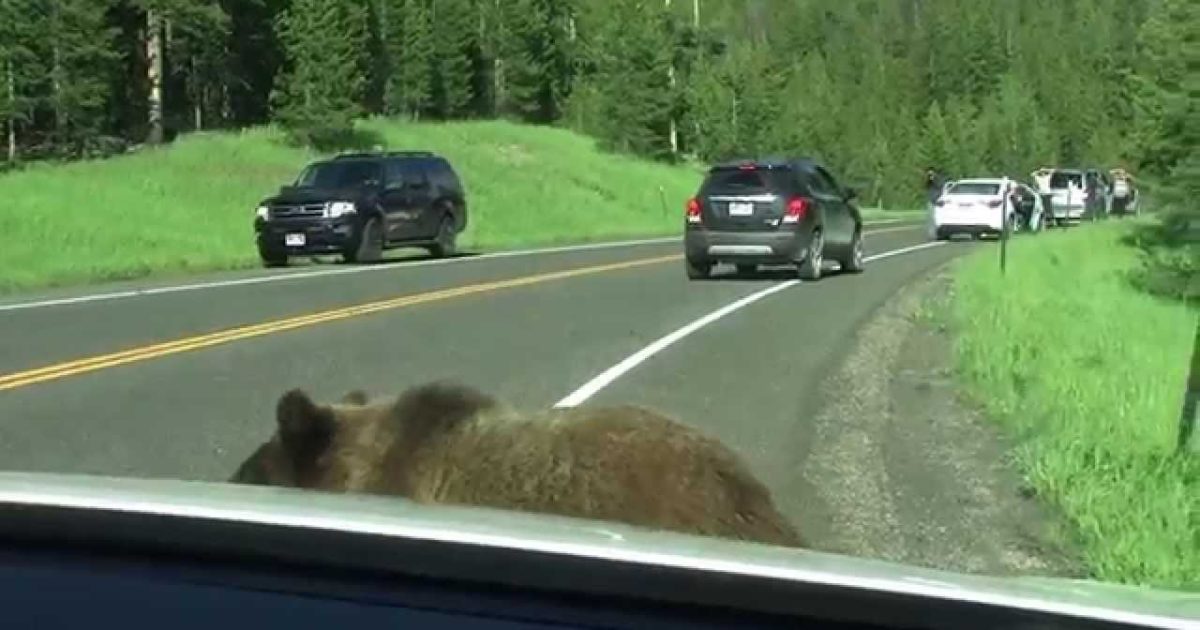 While it may seem kinda cool to the people in the car, you can clearly hear them squealing with delight as America’s apex predator climbs on their car trying to find a way in, but what they should have been was…afraid.

If that bear really wanted to get into that car, he could have. As you can plainly see, that grizzly in the video has absolutely NO FEAR of humans, to the bear, the people inside the car are nothing more than a means to an end, that end being “food”.

This is why the park rangers tell visitors to the park, to NOT FEED THE BEARS! Once these animals get conditioned to associate people with food, there is no stopping them if they want to grab a snack from some poor unaware campers.

The thing that the people in the car who took the video seemed to forget, was that these are very dangerous wild animals and they are NOT like Yogi Bear in the cartoons.

This next bit of information comes directly from the Yellowstone Park’s own website at www.nps.gov:

Visitors should be aware that all bears are potentially dangerous. Park regulations require that people stay at least 100 yards (91 m) from bears (unless safely in your car as a bear moves by). Bears need your concern, not your food; it is against the law to feed any park wildlife, including bears.

The Greater Yellowstone Ecosystem and northwest Montana are the only areas south of Canada that still have large grizzly bear (Ursus arctos horribilis) populations. Grizzly bears were federally listed in the lower 48 states as a threatened species in 1975 due to unsustainable levels of human-caused mortality, habitat loss, and significant habitat alteration. Grizzly bears may range over hundreds of square miles, and the potential for conflicts with human activities, especially when human food is present, makes the presence of a viable grizzly population a continuing challenge for its human neighbors in the Greater Yellowstone Ecosystem