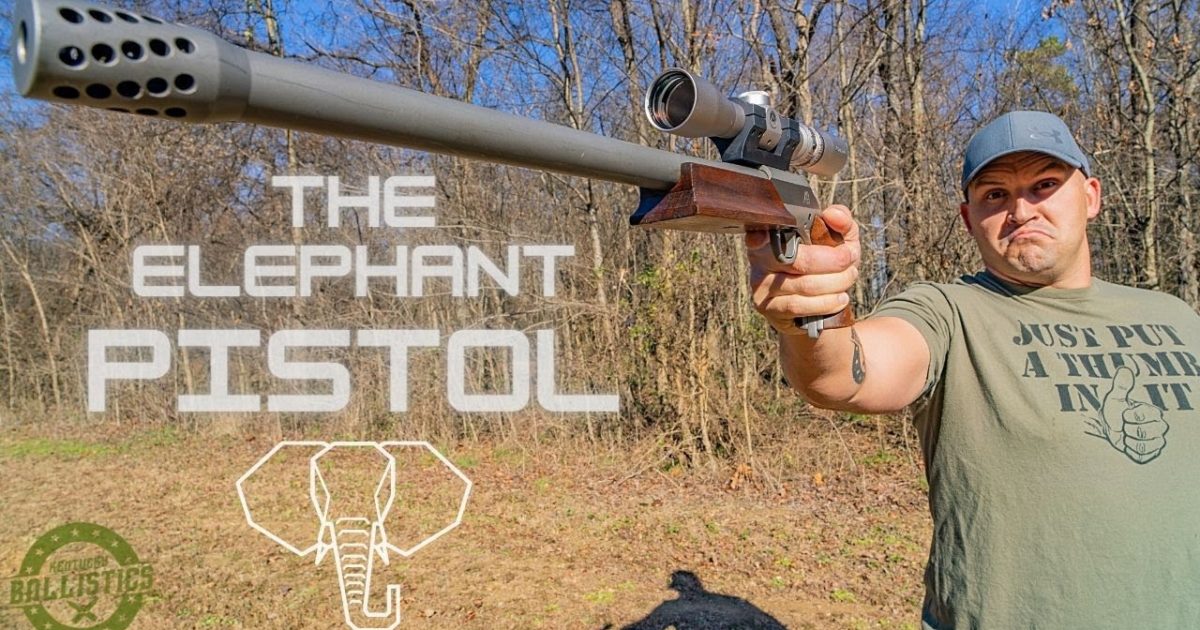 Well, I have to admit that I am truly impressed with Scott’s new toy!! And try as I might to find-out about this particular pistol, the information out on the web is sparse, but I’ll show you what I did find okay?

This particular hand gun chambered in the ridiculous caliber of 375 H&H magnum, is no longer in production, but there are a few out there for sale.

Surprisingly they aren’t all that expensive, but when you factor-in the fact that they are no longer made, getting one would be an awesome purchase for your collection of big bore guns (that’s if you are into that sort of thing).

Shooting this pistol would not only be kind of expensive, but you’d have to make sure your grip on it is tight, if not, then you might suffer a sprained wrist (at the very least), or even a broken wrist.

Here is some information on this monster pistol courtesy of thefreelibrary.com:

The M.O.A. Maximum, however, is just such a pistol. Manufactured by the M.O.A. Corporation, 110 Front Street, Dayton, Ohio 45402, the Maximum pistol is unique in that it’s a falling block with interchangeable barrels, plus you can get barrels for just about any reasonable cartridge you can think of.

Constructed entirely of 4140 steel, everything except the barrel is treated with Armoloy, giving it a dull, brushed-silver color. The barrel and iron sights are blued, as is the special aluminum scope mount offered by M.O.A. The grips and fore-end are walnut with no checkering. With factory installed iron sights the M.O.A. Maximum pistol tips the postal scale at 4-1/4 pounds, so it’s no lightweight. I removed the iron sights from my pistol and installed the M.O.A. scope mount and a Redfield 4X pistol scope. This raised the total weight of the pistol to 5-1/4 pounds. With a 14-inch barrel the Maximum is 18-1/4 inches long overall.

As mentioned, the M.O.A. Maximum is a falling block pistol operated by an underlever, like most falling block designs. The breechblock itself contains the firing pin, which is spring loaded so that it automatically withdraws into the block when pressure is released on it. A part called the operating lever link connects the breechblock to the operating lever. The lever itself has been redesigned a couple of times since M.O.A. first announced the pistol, and presently looks very much like those used on lever-action repeating rifles. When it’s closed, placing the breechblock in the raised position, the rear of the operating lever nestles in a channel milled in the front of the grip frame and is retained by a couple of tiny humps that act as detents. Pulling forward on the lever breaks it free from these detents, and as the lever pivots forward and down, it draws the breechblock down to expose the chamber.

The firing mechanism on this pistol is different, a design that makes the pistol safe to carry in the field with a loaded round in the chamber. The system begins with the external hammer, which is powered by a curved, flat mainspring set in the grip frame. Ahead of the hammer, extending through the receiver from the right side and pinned so that it pivots up and down, is the safety transfer lever. This lever is capped on the outside of the frame with a knurled button that affords its manual operation.

When the trigger is pulled, releasing the hammer, it drives a spring-loaded pin in the transfer lever forward, hitting the firing pin and pushing it forward to fire the round in the chamber. Actuating the operating lever with the hammer down automatically returns the transfer lever to the down, or safe, position, then the hammer is cocked to expose the chamber for reloading, and the hammer can be lowered to touch the frame. In no way can the hammer contact the firing pin, so the pistol can be carried in perfect safety.

If you wish to see some specs on this pistol click HERE.

So, now that you are up to speed on all of the particulars, let’s watch and see just how Scott handles this beast!!