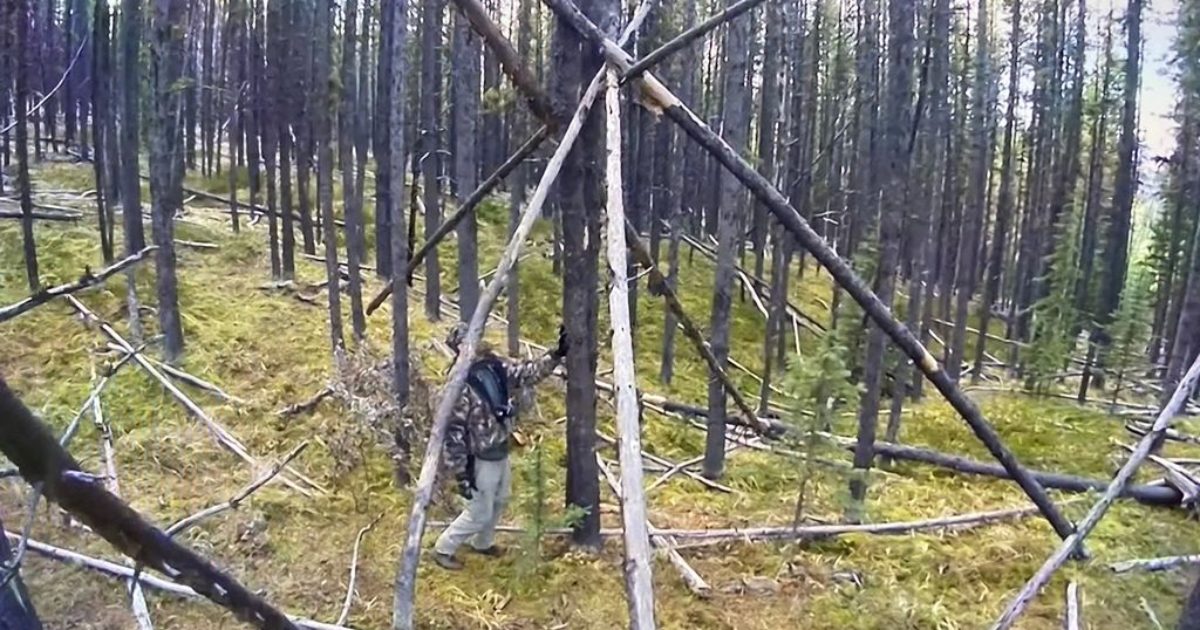 Have you ever been out in the middle of the woods where you know, no people live and found something that is so strange, it just doesn’t seem to belong there? Well, you’re not alone, more and more people are finding strange “tree structures” in the middle of the wilderness, trees that are arranged in such a way, that it just doesn’t seem possible for it to be just a case of random trees that have ‘fallen’ in almost an organized manner.

Now, there are some who would say just that, that because of heavy winds, or violent storms, trees get knocked-over all of the time and because of the density of the forest, trees fall on each other all of the time. But if you take a close look, even the untrained eye can see the difference. It’s one thing for a tree to get uprooted in a heavy storm and it’s quite another thing to see several different sized trees to be stripped of their branches and arranged in an almost intentional manner.

If you’ve ever seen one of these strange structures, you had to think to yourself- “Now how did that happen?”, it’s just too weird to have just happened like that, someone had to do this. And it could be that some other hikers, or campers, cut down a few trees and arranged them in such a way that they looked like some kind of ‘structure’ or, a teepee. But if that is the case, it would look like a human being did it, you know, ‘intentional’ and if it was a person, it would look more ‘finished’ right?

While the majority of these ‘structures’ seem rather strange, I don’t believe them to be ‘shelters’, but from what I have heard from quite a few researchers in the field, they are more of a ‘territorial’, or possibly even a directional marker made by these sasquatch ‘clans’, that let other sasquatch know that they are in another’s territory.

To me, that seems to be the most logical answer. Something else you may not notice, is that most of the excess limbs have been stripped off of the main logs and they have not been ‘cut’ with an axe or chainsaw, in fact, some of the large limbs have been broken off at various heights and that is a good indication that these structures aren’t the work of human beings. One would have to be over 8 feet tall and have incredible strength to ‘snap’ some of the larger limbs off at different heights.

Whatever the case, whether you are a believer, or not, something, or someone had to do this, there is a consistency here that makes random occurrences kind of impossible. How could a tree structure in British Columbia, or Alberta Canada, look almost exactly like a tree structure in Northern California , Oregon, or Washington State?

It’s not like a black, or even a brown bear could do this. Could it be some idiot out in the middle of the woods perpetrating a hoax…possibly, but the bigger question is “why”? Do you know anybody willing to drive (or hike), to the middle of nowhere just for a gag…I don’t think so. I sure don’t know anybody with that kind of free time on their hands. But for the sake of argument, yes, it is possible, but not probable. Could it be a bunch of drunk loggers doing this to freak-out some tree-huggers and again, if so- ‘why’?

Or, after you have hiked 20 miles into the forest to get some ‘one-on-one’ time with nature and you do come across a tree structure, could it possibly mean that there is a sasquatch in the vicinity…who knows. But if you do find one of these structures in the middle of nowhere, pay attention and really LOOK at it and see for yourself.

Watch the video below and afterwards let us know what you think in the comment section below.