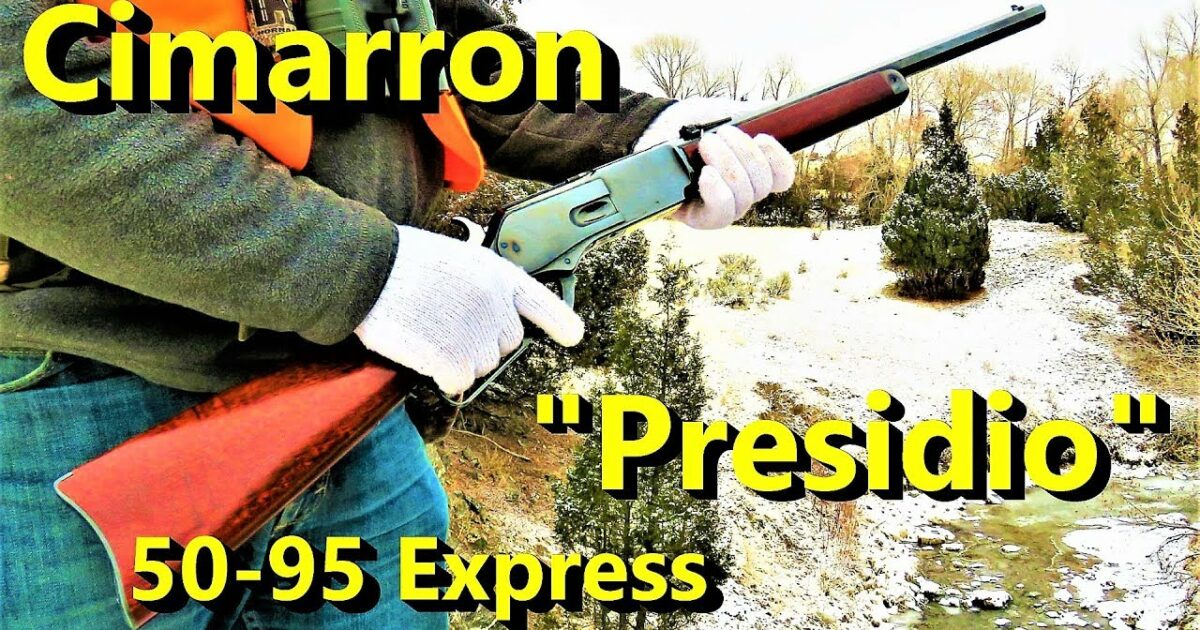 The story behind this particular rifle is somewhat of a mystery, from what I can figure out and what I have read, this rifle was not massed produced in it’s day, but was a custom order for one customer. Who that original customer was has been lost to history, but there is a story behind it’s recreation.

This is an excerpt from americanrifleman.org:

While the Texas Ranger Model P captures the romance of the Texas Rangers, Cimarron’s second tribute—the Texas Ranger Presidio Mystery 1876 Short Rifle—embodies mystery and intrigue. It is an Uberti-made saddle ring 1876 rifle, with an unusually short (for a Model ’76) 20” octagon barrel, button magazine, and chambered in .50-95 Win.

But most significantly, the left sideplate is engraved:

“A retired Texas Ranger walked into my office,” Mike recalls, in telling how Cimarron came to reproduce this historical curiosity. “Under his arm he was carrying the original of this gun, wrapped in an oil cloth and the gun was coated, inside and out, with axle grease. It had been stored for a hundred years. He was wondering if we could make a copy of this gun for his two sons. I said we could, but I would also like to produce this rifle as a regular part of my line, as it is one of the most interesting guns I’ve ever seen.”

The retired Ranger related he had purchased this rifle, while on a manhunt in Mexico many years ago, from an elderly lady who told him her grandfather occasionally used to serve as a scout for the Rangers. She was unable to tell him how this rifle found its way into Mexico or why it had been so carefully preserved. Was it, the Ranger wondered, a gift to a long-forgotten individual commemorating some notable event that occurred in the county of Presidio, Texas in 1883? If so, the only reference I have been able to find was of a gunfight that year in Presidio County involving three unidentified Texas Rangers. Could this rifle have been given to—or used by—one of them? After all, Presidio County lies within the jurisdiction of Texas Ranger Company E, and shares its western border with Mexico. Plus, a noted Texas Ranger, Captain Charles Nevill, was living in Presidio County about that time and served as its sheriff from 1882 to 1890, after he had retired from the Rangers.

However, the serial number of the rifle indicates it was shipped from the Winchester factory in 1884, so it obviously could not have been used before that date, further solidifying the theory that it was a commemoration. But to whom? And why? And what do the seven notches on the frame signify? Paired with the rifle’s inscription, we can logically surmise they represent seven dispatched “bad guys,” but that is only an assumption. To further complicate things, according to the Texas Ranger who brought the gun to Mike, the ‘76 was rumored to have been stolen from its original owner. It is also known that in 1918, long after his death, there was a raid on Nevill’s ranch by Mexican banditos, and everything of value was taken. Emulating General “Black Jack” Pershing’s “Punitive Expedition” of a few years earlier, a posse of Texas Rangers quickly pursued the outlaws across the Mexican border and captured 30 of them. That may—or may not—explain how the rifle eventually ended up in Mexico. But it was never found. And why it was so carefully preserved and hidden for all these years remains a mystery, one that will probably never be solved.

The original rifle is now on loan to the Texas Ranger Historical Foundation, and Cimarron has received permission to reproduce it, with a portion of its sales being donated to the foundation. The retail price of each gun is $2,118.96, and .50-95 Win. ammo, specially loaded for Cimarron’s 1876 rifle, is available in both black powder and reduced smokeless loadings from Buffalo Arms. Thus, even though the mystery of the Presidio Short Rifle remains unsolved, thanks to Cimarron, we can at least own—and shoot—a replica of its history.

If you wish to buy one of these rifles for yourself you can do so by clicking HERE.