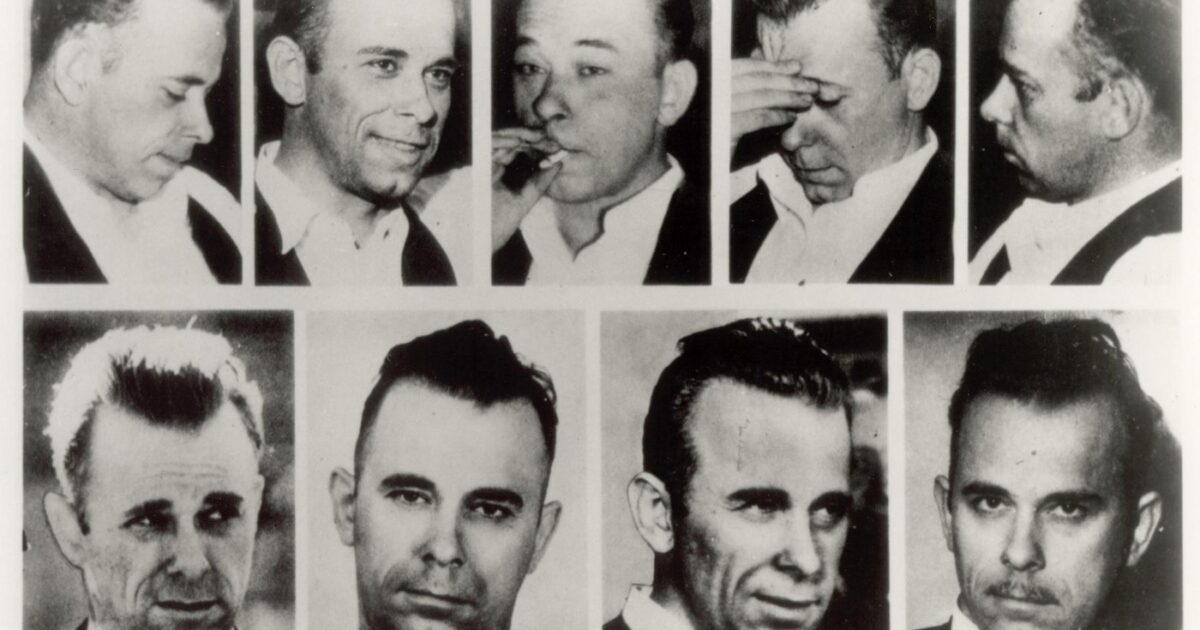 When we think back about the Great Depression, it’s not a stretch to remember the gangsters of that era and who was more famous, then John Herbert Dillinger. To some, Dillinger was a hero, to others, he was nothing more than a mad dog killer who would get his just deserts in the end.

Dillinger, whose name once dominated the headlines, was a notorious and vicious thief. From September 1933 until July 1934, he and his violent gang terrorized the Midwest, killing 10 men, wounding 7 others, robbing banks and police arsenals, and staging 3 jail breaks—killing a sheriff during one and wounding two guards in another.

John Herbert Dillinger was born on June 22, 1903 in the Oak Hill section of Indianapolis, a middle-class residential neighborhood. His father, a hardworking grocer, raised him in an atmosphere of disciplinary extremes, harsh and repressive on some occasions, but generous and permissive on others. Most definitely John Dillinger was a product of the times.

His period of infamy began on May 10, 1933, when he was paroled from prison after serving eight-and-a-half years of his sentence. Almost immediately, Dillinger robbed a bank in Bluffton, Ohio. Dayton police arrested him on September 22, and he was lodged in the county jail in Lima, Ohio to await trial.

In frisking Dillinger, the Lima police found a document which seemed to be a plan for a prison break, but the prisoner denied knowledge of any plan. Four days later, using the same plans, eight of Dillinger’s friends escaped from the Indiana State Prison, using shotguns and rifles that had been smuggled into their cells. During their escape, they shot two guards.

On October 12, three of the escaped prisoners and a parolee from the same prison showed up at the Lima jail where Dillinger was incarcerated. They told the sheriff that they had come to return Dillinger to the Indiana State Prison for violation of his parole.

When the sheriff asked to see their credentials, one of the men pulled a gun, shot the sheriff, and beat him into unconsciousness. Then taking the keys to the jail, the bandits freed Dillinger, locked the sheriff’s wife and a deputy in a cell, and leaving the sheriff to die on the floor, made their getaway.

Although none of these men had violated a federal law, the FBI’s assistance was requested in identifying and locating the criminals. The four men were identified as Harry Pierpont, Russell Clark, Charles Makley, and Harry Copeland. Their fingerprint cards in the FBI Identification Division were flagged with red metal tags, indicating that they were wanted.

Meanwhile, Dillinger and his gang pulled several bank robberies. They also plundered the police arsenals at Auburn, Indiana and Peru, Indiana, stealing several machine guns, rifles, and revolvers, a quantity of ammunition, and several bulletproof vests. On December 14, John Hamilton, a Dillinger gang member, shot and killed a police detective in Chicago. A month later, the Dillinger gang killed a police officer during the robbery of the First National Bank of East Chicago, Indiana.

Then they made their way to Florida and, subsequently, to Tucson, Arizona. There on January 23, 1934, a fire broke out in the hotel where Clark and Makley were hiding under assumed names. Firemen recognized the men from their photographs, and local police arrested them, as well as Dillinger and Harry Pierpont. They also seized three Thompson submachine guns, two Winchester rifles mounted as machine guns, five bulletproof vests, and more than $25,000 in cash, part of it from the East Chicago robbery.

Dillinger was sequestered at the county jail in Crown Point, Indiana to await trial for the murder of the East Chicago police officer. Authorities boasted that the jail was “escape proof.” But on March 3, 1934, Dillinger cowed the guards with what he claimed later was a wooden gun he had whittled. He forced them to open the door to his cell, then grabbed two machine guns, locked up the guards and several trustees, and fled.

It was then that Dillinger made the mistake that would cost him his life. He stole the sheriff’s car and drove across the Indiana-Illinois line, heading for Chicago. By doing that, he violated the National Motor Vehicle Theft Act, which made it a federal offense to transport a stolen motor vehicle across a state line.

A federal complaint was sworn charging Dillinger with the theft and interstate transportation of the sheriff’s car, which was recovered in Chicago. After the grand jury returned an indictment, the FBI became actively involved in the nationwide search for Dillinger. Herbert Hoover who was then head of the FBI, made Dillinger “Public Enemy Number 1” and swore that the FBI would bring Dillinger in, dead, or alive.

The end for John Dillinger came on Sunday, July 22, Cowley ordered all agents of the Chicago office to stand by for urgent duty. Anna Sage called that evening to confirm the plans, but she still did not know which theater they would attend. Therefore, agents and policemen were sent to both theaters. At 8:30 p.m., Anna Sage, John Dillinger, and Polly Hamilton strolled into the Biograph Theater to see Clark Gable in “Manhattan Melodrama.” Purvis phoned Cowley, who shifted the other men from the Marbro to the Biograph.

Cowley also phoned Hoover for instructions. Hoover cautioned them to wait outside rather than risk a shooting match inside the crowded theater. Each man was instructed not to unnecessarily endanger himself and was told that if Dillinger offered any resistance, it would be each man for himself.

At 10:30 p.m., Dillinger, with his two female companions on either side, walked out of the theater and turned to his left. As they walked past the doorway in which Purvis was standing, Purvis lit a cigar as a signal for the other men to close in.

Dillinger quickly realized what was happening and acted by instinct. He grabbed a pistol from his right trouser pocket as he ran toward the alley. Five shots were fired from the guns of three FBI agents. Three of the shots hit Dillinger, and he fell face down on the pavement. At 10:50 p.m. on July 22, 1934, John Dillinger was pronounced dead in a little room in the Alexian Brothers Hospital.