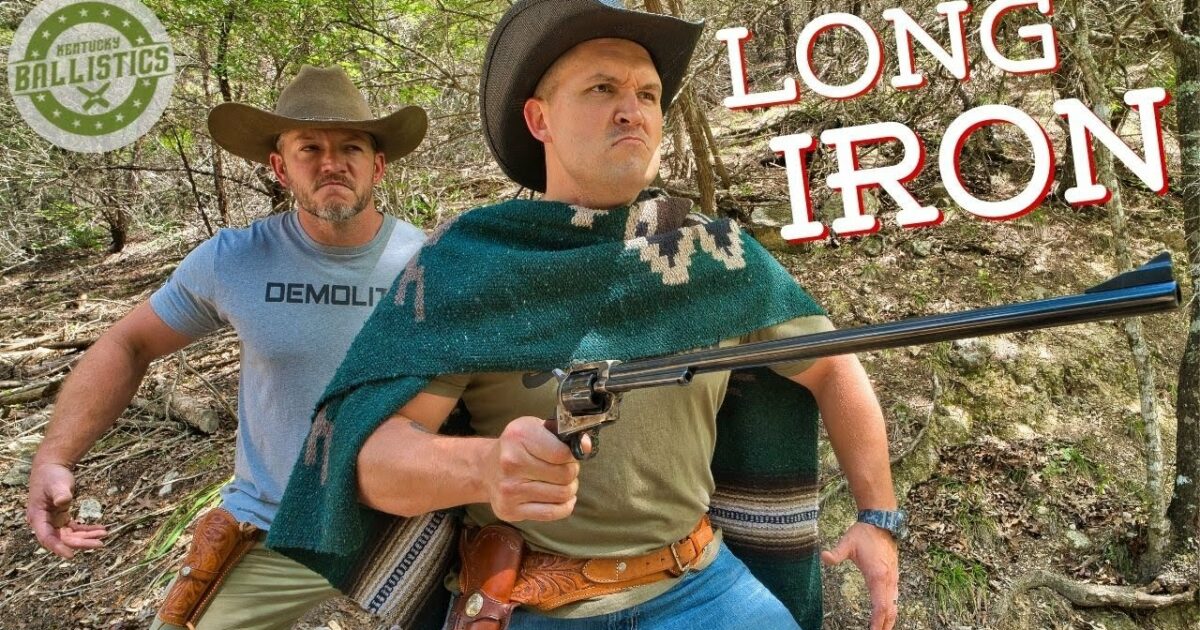 I really like it when Scott DeShields Jr. (Kentucky Ballistics) and Matt Carriker (Demolition Ranch) get together and do a video, it’s guaranteed mayhem and fun!!

Today the boys have a very special treat in-store for us, in the form of a “Colt Buntline”. It’s made by Uberti and if you’ve never seen one like this before, let me fill you in on the specifics of this gun.

It’s a gun with some history to it, though you probably never saw it in any cowboys movies. It fires your standard 45 long colt ammunition and other than the 18 inch barrel, there’s really nothing super special about this gun, in fact I doubt anyone during the late 1800’s would have carried one on their hip.

Here’s what Wikipedia has to say about this gun and beneath that I’ll place some info from Uberti along with a link to their website just in case you might be interested in buying one.

The Colt Buntline Special was a long-barreled variant of the Colt Single Action Army revolver, which Stuart N. Lake described in his best-selling but largely fictionalized 1931 biography, Wyatt Earp: Frontier Marshal. According to Lake, the dime novelist Ned Buntline commissioned the production of five Buntline Specials. Lake described them as extra-long Colt Single Action Army revolvers, with a 12-inch (300 mm)-long barrel, and stated that Buntline presented them to five lawmen in thanks for their help in contributing local color to his western yarns.

Lake attributed the gun to Wyatt Earp, but modern researchers have not found any supporting evidence from secondary sources or in available primary documentation of the gun’s existence prior to the publication of Lake’s book. After its publication, various Colt revolvers with long (10-inch or 16-inch) barrels were called Colt Buntlines or Buntline Specials. Colt manufactured the pistol among its second-generation revolvers produced after 1956. A number of other manufacturers, such as Uberti, Navy Arms, and Cimarron Arms, have made their own versions of this long-barreled revolver.

The Colt Buntline 1873 Single-Action target revolver has become one of the icons of the Old West. Only 31 of the original Buntline revolvers were ever produced, and only 18 of those are around today.

The name Buntline Specials was given to long-barreled Peacemakers, based on this story: Tradition has it that dime novelist Ned Buntline presented special-order 1873 Colt revolvers with extra-long barrels, target sights, and detachable wire shoulder stocks to a select group of Old West celebrities. They included Wyatt Earp and Bat Masterson. To order one click HERE.