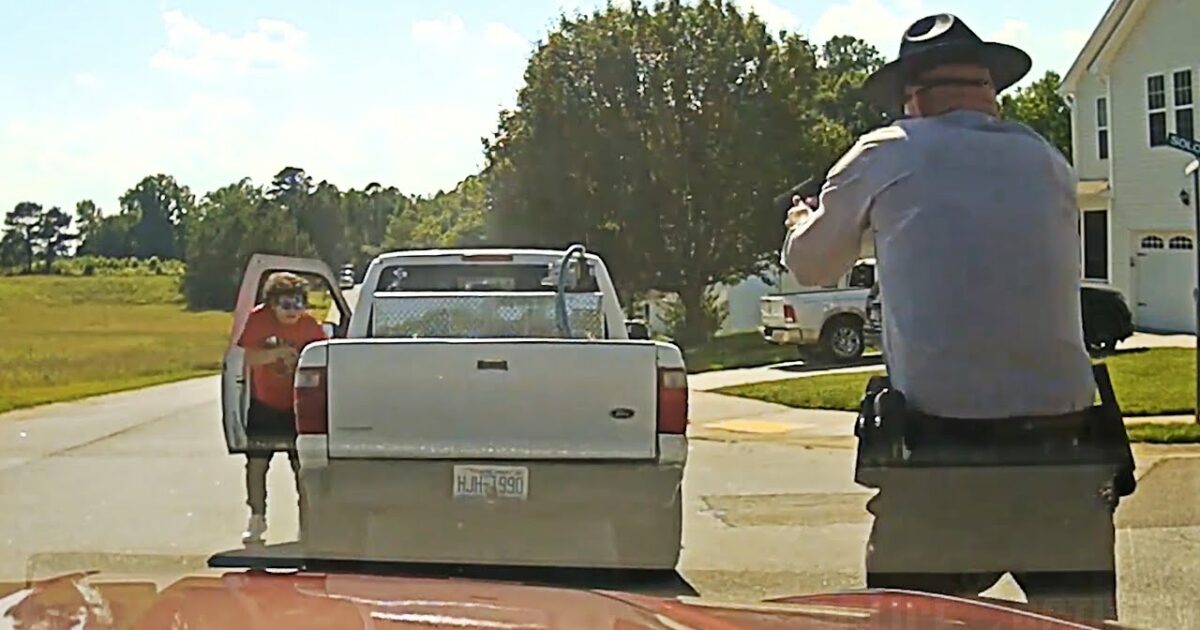 If you are looking to get yourself shot, then by all means, be stupid enough to point a gun at a police officer. It’s hard for any sane person to figure out why on earth any reasonably sane person would do such a stupid thing, that is unless you have a death wish.

Foolish, as the man in the pick-up truck may have been, he had to know, that once he pulled out a pistol and pointed it at the state trooper, he was a dead man. All of this because he wasn’t wearing a seatbelt (and didn’t have any form of identification either), what a waste of a life.

Seeing someone make such a terrible mistake makes me very sad, now his family will have to go through life without him. If anything, seeing a video like the one below, should make everyone who sees it, think twice before doing something so blatantly stupid.

Siler City, North Carolina — The North Carolina State Highway Patrol released dash camera video showing a trooper shooting a man who emerged from his driver’s seat with a gun in his hand during a traffic stop in Chatham County.

The video shows 21-year-old Mark Diaz of Staley being pulled over for a seatbelt violation by Trooper Rodney Cook on May 30 around 4:30 p.m. Video shows the trooper asking Diaz to get out of his truck after he fails to give him an ID, authorities said. Cook also suspected drug use, according to NCDPS.

Once asked to get out of the truck, the driver, Diaz, pulled out a pistol, the video shows. Cook then tried to block the gun and retreated toward his patrol car.

The trooper fired a shot at Diaz as he stepped out of the truck with the gun. As Cook fires, the video shows the truck rolling forward, stalling out and a passenger jumping from the car, fleeing the scene, but returning later, according to Highway Patrol. The dashcam video shows Diaz down on the pavement as Cook called in the incident from his car.

He shouted for Diaz to drop the pistol he is still clutching. Cook approaches Diaz who is still on the ground with the gun in his hand. Cook gets the gun away from Diaz and radios for backup and EMS assistance. Cook also begins performing life-saving measures on Diaz.

However, Diaz was taken to the hospital where he died a short time later. Cook was not hurt during the traffic stop. He was placed on administrative leave pending an internal investigation which is agency protocol.

*Due to the graphic content of the video, you will have to sign-in to YouTube to verify your age before watching. And I should also stress, that the footage in the video is extremely graphic in nature