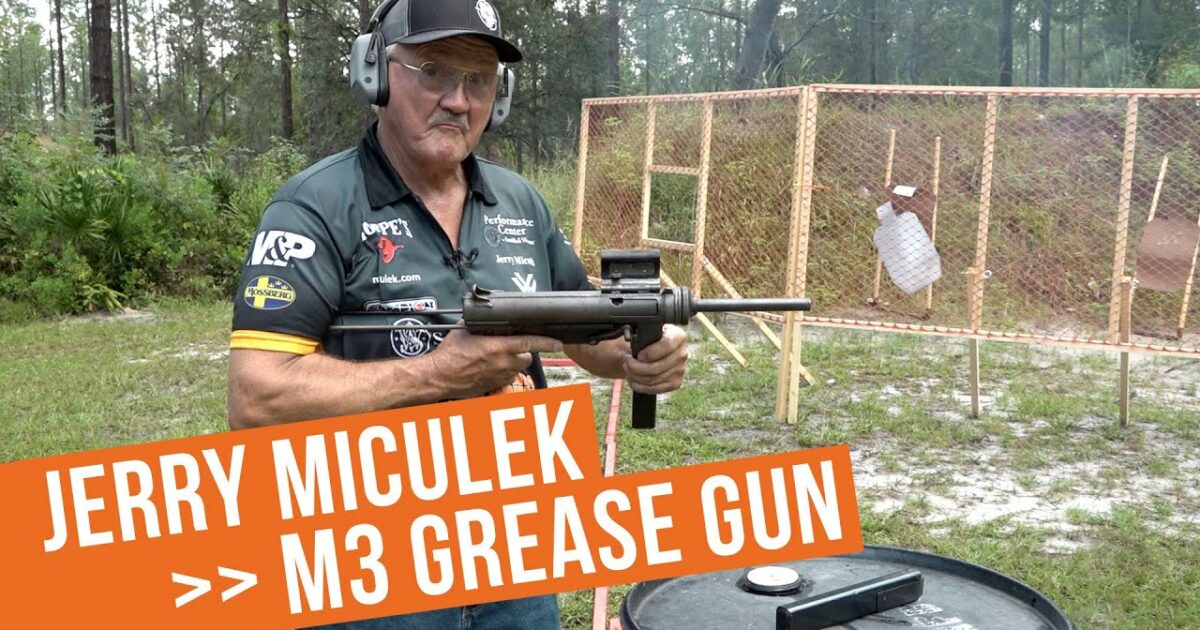 While I was stationed at Fort Hood, Texas back in 1979 with the 1st Cavalry Division, one of my assigned weapons was the M3. From 1975 to 1978, while stationed with other units, I had never even seen one before, so when I was assigned to the 1/12th Cavalry and our Unit Armorer  asked me what kind of weapon I wanted assigned to me, naturally I said I wanted the M3 and I sure had some fun with that little machine gun!!

Loading the magazines was a pain in the butt, but when I shot it, boy did I have some serious fun!!

Here’s a little bit of history and information about this weapon:

The M3 is an American .45-caliber submachine gun adopted for the U.S. Army service on 12 December 1942, as the United States Submachine Gun, Cal. .45, M3. The M3 was chambered for the same .45 ACP round fired by the Thompson submachine gun, but was cheaper to produce and lighter, although, contrary to popular belief, it was less accurate.

The M3 was commonly referred to as the “Grease Gun” or simply “the Greaser“, owing to its visual similarity to the mechanic’s tool.

The M3 was intended as a replacement for the Thompson, and began to enter frontline service in mid-1944. The M3A1 variant was used in the Korean War and later conflicts.

The M3 is an automatic, air-cooled blowback-operated weapon that fires from an open bolt. Constructed of plain 0.060-inch-thick (1.5 mm) sheet steel, the M3 receiver was stamped in two halves that were then welded together.

The M3 has a fixed firing pin milled into the face of the bolt and fires using the principle of advanced primer ignition blowback operation. The bolt was drilled longitudinally to support two parallel guide rods, upon which were mounted twin return (recoil) springs.

This configuration allows for larger machining tolerances while providing operating clearance in the event of dust, sand or mud ingress. The M3 features a spring-loaded extractor which is housed inside the bolt head, while the ejector is located in the trigger group. Like the British Sten, time and expense was saved by cold-swaging the M3’s barrel.

Now, anyone who’s ever owned and fired a gun, knows who Jerry Miculek is, but just incase you’ve been living under a rock, I’ll give you a little bit of info about him:

Jerry Charles Miculek Jr. is an American professional speed and competition shooter. Miculek has emptied a five-shot revolver in 0.57 seconds in a group the size of a playing card, thus being dubbed “The Greatest Shooter of all Time”

Okay, now that we have all that straightened out, you can sit back and watch Mr. Miculek do his thing!!