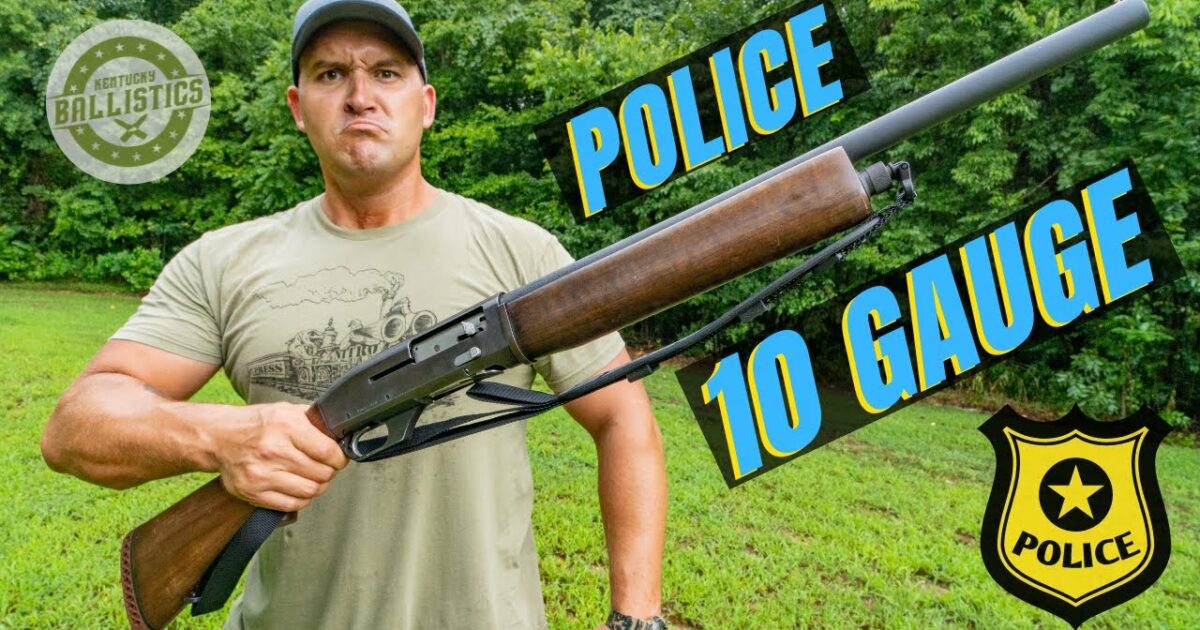 Well boys and girls, it looks like Scott has reached deep into his magic bag of tricks and pulled-out a real ‘humdinger’ this time! Take a look everybody at the Ithaca Mag-10 aka ‘The Roadblocker’! Everybody knows a 12 gauge shotgun is a great tool for crowds and will make a real mess out of a human being, but what about a 10 gauge?

Well, I’m not going to spoil it for you, but let’s just say, if you’re thinking it’ll make a BIG MESS, you wouldn’t be wrong. And since Scott always has some great ideas for targets (that are really-really messy) you surely will not be disappointed! The Ithaca Mag-10 was the world’s first 10 GA semi-automatic gas-operated shotgun chambered in 10-gauge.

This next bit of information comes from imftb:

The Ithaca Mag-10 “Road Blocker” was designed by Ithaca for the law enforcement market and became available from 1978 until 1986.

It was the tactical version of the Ithaca Mag-10 sporting shotgun (1975-1989). It was intended as a specialty shotgun specifically to stop vehicles (road blocks) and as an entry gun.

The semi-auto design and the weight of the Mag-10 made it very controllable, but it was also bulky and did not lend itself to fast handling. The Roadblocker was advertised with both a 20″ and 22″ (which actually measured out to 21″ 3/4) barrels.

The option of a plain or vent barrel was also available. The shotgun had a parkerized finish on the barrel, receiver and non-checkered walnut stock and forearm.

There were no Ithaca factory markings of the name “Roadblocker” on the shotgun receiver, barrel or stock or any identifying letters in the serial number.

Ithaca marketing for the Roadblocker to law enforcement agencies declared the Mag-10 “can stop a car in its tracks.” The Road Blocker is no longer in production, but Remington bought the rights to the design and have released their model designated SP-10.

Okay, now that you’re all up to speed on all of that, let’s watch Scott make a mess !