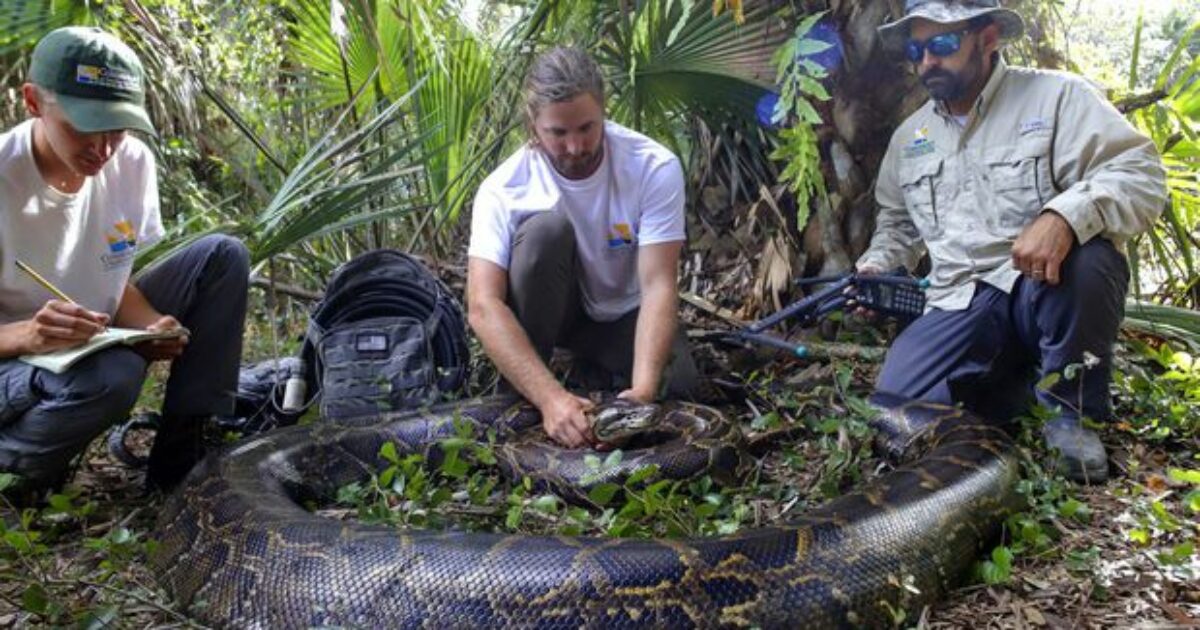 Invasive species are not just a threat to our environment, they are a threat to all of the other animals living in our country. A snake like the one in the video below, has no natural predators here in the United States, other than the alligator (when the snake is very young) and the Burmese Python far out-grows the alligator in a shorter span of time and that puts the alligator on the snake’s menu, along with any other animals that come into contact with it. Invasive species do irreparable damage when introduced into a new environment, especially when that particular species has no natural predators to keep it in check.

Here is the story of this particular animal mentioned in the video below:

The Conservancy of Southwest Florida has announced record-breaking developments in its invasive Burmese python research program with the documentation of the largest python found to date in Florida. The female python measured nearly 18 feet in length and weighed in at 215 pounds.

A team of wildlife biologists at the Conservancy recently discovered and captured the python through its nationally recognized research program, which uses radio transmitters implanted in male “scout” snakes to understand python movements, breeding behaviors, and habitat use. Scout snakes can lead biologists to breeding aggregations and large, reproductive females, allowing researchers to remove breeding females and their developing eggs from the wild.

“How do you find the needle in the haystack? You could use a magnet, and in a similar way our male scout snakes are attracted to the biggest females around,” said Ian Bartoszek, wildlife biologist and environmental science project manager for the Conservancy of Southwest Florida.

“This season we tracked a male scout snake named Dionysus, or Dion, to a region of the western Everglades that he frequented for several weeks. We knew he was there for a reason, and the team found him with the largest female we have seen to date.” Ian Easterling, a biologist on the team, and Kyle Findley, an intern for the project, helped capture the record-sized female and haul it through the woods to the field truck.