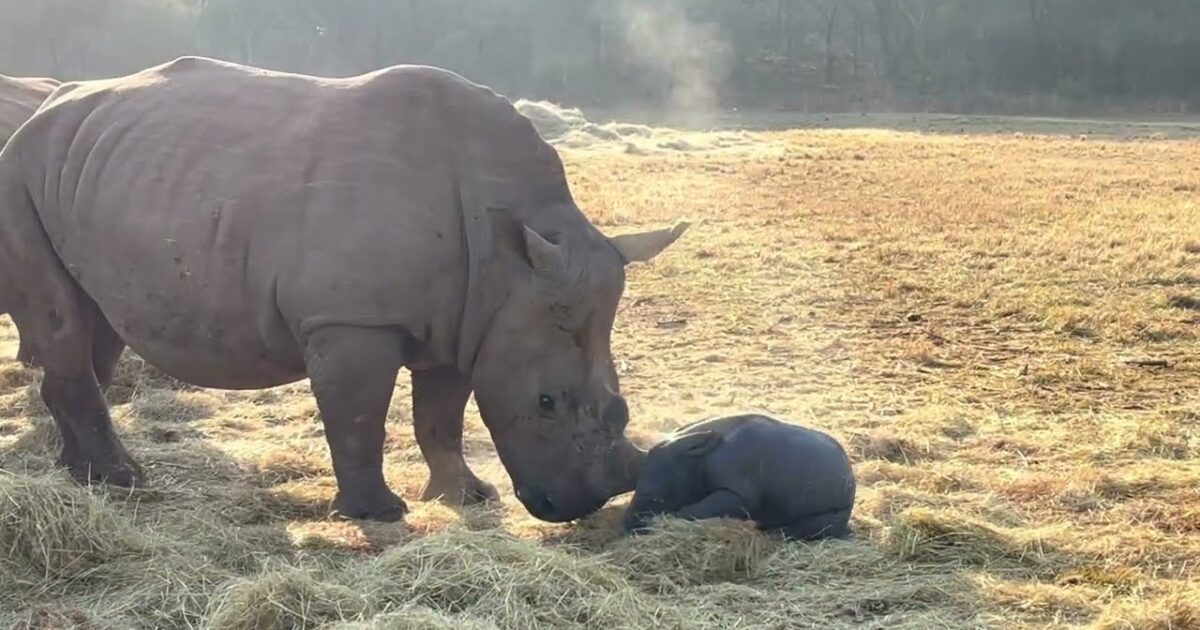 The Rhinoceros are a critically endangered species with less than 30,000 rhino living in the wild today. At the start of the 20th century, there were over 500,000, initially, numbers dropped due to hunting, but today the main threats to rhinos are poaching and habitat loss.

Following the announcement of a new birth at Care for Wild Rhino Sanctuary in South Africa, They are extremely humbled and privileged to be able to share this incredible footage below with you.

Despite keeping his distance, Olive remained close to her long-term protector throughout the early stages of labour and kept him close during delivery.

This was an unbelievably special moment to see this precious new life take his first breaths. ‘Olive’ was orphaned in 2013, after poachers killed her mother.

She was just 10 months old when she was rescued and brought to Care for Wild. ‘Olive’ was one of the first rhinos to complete her rehabilitation program and enter the rewilding and release program.

Her little son has become the third calf born to two orphans of poaching making ‘Storm’, a father for the third time.

Another light, another sign of hope for the species.

It’s up to us to make sure that all endangered species get the help and support that they need. But as long as there is an illegal demand for certain body parts of animals like the rhinoceros, poachers will continue to slaughter these wonderful animals with no regard for the future.

Poaching and illegal trade of rhino horn has increased sharply since 2007 and remains one of the major reasons rhino are still endangered today. Poaching is big business, and well organised criminal gangs are now well-equipped to track and kill rhino.

One rhino horn can fetch in excess of an incredible £200,000. Political and economic instability within countries can increase the threat of poaching too.

Rhino horn trade has been banned under the Convention on International Trade in Endangered Species (CITES) since 1977, yet the black-market demand for rhino horn is high.

Rhino horns are used in traditional Asian medicine, particularly in Vietnam and China, though there is no scientific evidence that keratin found in the horn is beneficial as a remedy.

More recently, and particularly among the middle and upper classes of Vietnam, the purchase of rhino horn signifies someone’s wealth and success, it is also used as a status symbol and is said to be an aphrodisiac.