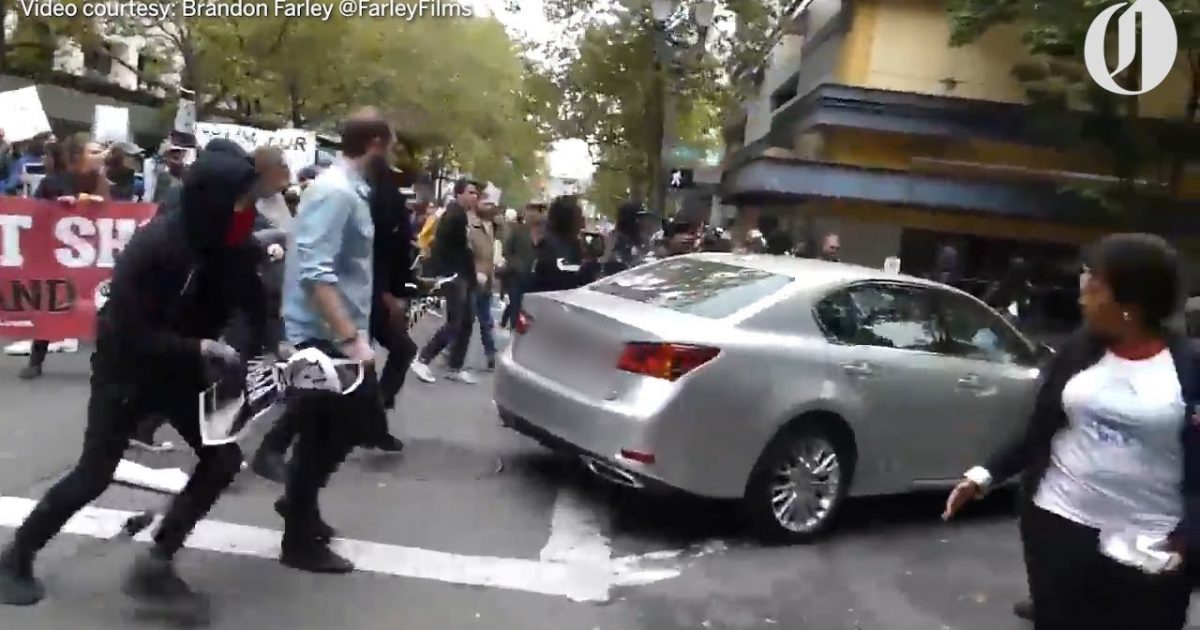 Antifa actually posted these videos of themselves attacking any motorists that came into their (illegal) protest area as shown. Their tweet matter-of-factly stated that they chased after and attacked the gentleman in his car in “self-defense”.
You cannot make this up. You’d think these little anit- facists would have more self-awareness than to post such things but no, presumably the Open Society Foundation paychecks are sweet enough that these degenerates felt secure enough to come out block traffic and flaunt anti-white racist rhetoric, which is rather comical because most of them are “white” themselves
Portland Mayor Ted Wheeler came under fire over a viral video (seen below), showing Antifa & Black Lives Matter THUGS blocking traffic and harassing and threatening drivers, but he says he supports the decision by police to watch from a distance without getting involved.
“I was appalled by what I saw in the video, but I support the Portland Police Bureau’s decision not to intervene,” he said at a Friday press conference.  That’s interesting, because Mr. Wheeler, who also holds the title of police commissioner, took a swipe at recent unflattering news coverage, such as a Fox News story headlined, “Mob rule? Leftist protesters take over Portland street.”
“I’m willing to take criticism all day long from Fox News,” he said. “But I’m not willing to accept criticism from Fox News of the men and women of the Portland Police Bureau.” The video showed protesters, including members of Antifa and Black Lives Matter, blocking an intersection and attempting to direct traffic at while officers on motorcycle watched from a block away.
At one point, the activists chased down 74-year-old Kent Houser after he made a right turn against their wishes, pounding on his silver Lexus and breaking a window. The car sustained thousands of dollars in damage, he told the Oregonian.
Even so, Mr. Wheeler insisted that “motorists should feel completely safe coming into downtown Portland.” Demonstrators did not obtain a permit before holding the Oct. 6 march to protest the death of Patrick Kimmons, a 27-year-old black man who was shot and killed Sept. 30 by police. The shooting is under investigation.
The mayor has been accused of taking a kid-gloves approach to the protests that routinely roil the liberal enclave, such as the summer occupation of the Immigration and Customs Enforcement (aka ICE) building, which saw Portland police refuse to assist unless federal officers were in physical danger.
“This is the kind of street anarchy that routinely happens where I live,” tweeted Mr. Ngo.  Rioting broke out Saturday night as Antifa activists brawled with protesters who turned out for a “flash march for law and order,” organized the right-tilting group Patriot Prayer.
The mayor argued that law enforcement is in a no-win situation.
That’s interesting, because either you are for law and order (which a mayor and police commissioner are SUPPOSED TO BE for), or you’re not, it’s just that simple.
As you can clearly see in the video, the elderly man driving the car just wanted to get the hell out of there. Oh, FYI, the original video was much more graphic and since it clearly showed ANTIFA terrorizing peaceful citizens, YouTube took it down.

[Video] Faced With An Armed Carjacking By Rabid Thugs….Watch What This Courageous Woman Does
Thinking About Voting For Bernie…Then You Should Watch These Two Videos First